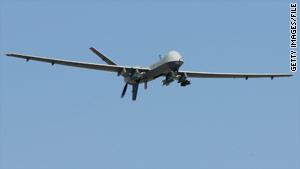 Officials say strikes in Pakistan by drones like the MQ-9 Reaper have not stopped some militants' desire to travel there.
STORY HIGHLIGHTS

The strike happened in the Mir Ali area of North Waziristan, the officials said.

Missiles struck a building that held the eight, who are believed to have been members of the group Jihad al Islami, the officials said.

The strike comes a day after the U.S. Department of Homeland Security and the FBI issued a joint bulletin warning that terror attacks were being plotted against targets Europe. European intelligence officials said Monday that a group of jihadists from Germany were at the heart of the plots, but it was not immediately clear if the warning and the suspected drone strike were related.

The alert did not cite specific countries because the information about the threat was not specific enough to do so, a State Department spokesman said Monday.

"We have credible information that justified the alert, but it is not specific at this point," said State Department spokesman P.J. Crowley.

Japan issued a similar alert Monday, citing the warnings issued by the United States and by Britain, which raised the level highest for France and Germany.

Britain's Foreign and Commonwealth Office changed its travel advisory for British citizens in France and Germany from a "substantial" threat of terrorism to a "high" threat, but the office said it does not comment on intelligence matters and thus could not say whether the change was related to the U.S. travel alert.

A spokeswoman for Germany's Interior Ministry said the country will remain at Level 2 alert, which indicates a "high, probable risk" of a terrorist attack.

Spain has remained at this stage since January of this year.

The four-page U.S. bulletin, a copy of which was obtained by CNN, is titled "Al Qaeda Threat to Europe."

A group of jihadists from the German city of Hamburg is alleged to be at the heart of the alleged al Qaeda plot to launch coordinated terrorist attacks against European cities, European intelligence officials said.

Western intelligence officials say they learned about the alleged plot after Ahmed Sidiqi, a German citizen of Afghan descent, was arrested in Afghanistan in July and taken to the U.S. air base at Bagram for questioning.

He has not been charged and intelligence sources in Germany said he was cooperating with the investigation.

In early 2009, Sidiqi and 10 others left Hamburg for the tribal areas of Pakistan -- where most joined a jihadist group fighting U.S. and coalition forces across the border in Afghanistan, according to German intelligence officials.

A German Foreign Ministry official told CNN Monday that German authorities have been given access to Sidiqi in Afghanistan.

Over the weekend, CNN spoke with Sidiqi's sister in Hamburg, who said his family was shocked by the allegations against him. She said Sidiqi told his family in 2009 that he was traveling to Afghanistan to start a new life with his wife. They last heard from him shortly before his arrest, when he phoned to tell them that he would soon be returning home because he missed his family, said his sister, who described him as a devout, family-loving man.

German officials said the Hamburg group members were recruited from the Taiba mosque in Hamburg. In the 1990s, that same mosque -- then called Al Quds -- was attended by Mohamed Atta, who went on to become the lead hijacker in the 9/11 attacks.

A friend of Atta from those days has emerged as a crucial figure in the new plot, European intelligence officials tell CNN. Naamen Meziche, 40, a French citizen of Algerian descent, worked to persuade a number of young men praying at the Taiba mosque to join in jihad, the officials said.

Though his exact whereabouts are unknown to authorities, he is thought to be in the Afghan/Pakistan border area. Meziche's wife told CNN that he was overseas.

According to a European counterterrorism official, Meziche had connections to al Qaeda dating to the 1990s that he rekindled once he arrived in Pakistan's tribal areas.

Most of the members of the group which coalesced late in 2008, left Pakistan before authorities had a chance to stop them, despite constant surveillance of suspected militants at the Taiba mosque, according to German intelligence officials.

The group used several routes to get to Pakistan, some going overland through Iran and some traveling by air via the Persian Gulf. Managing the logistics, according to German intelligence officials, was a man known as Asadullah M., 52, a Hamburg resident of Afghan origin who is thought to be in the Pakistani tribal area along the Afghan border.

Eight members of the travel group, including two wives of the militants, eventually made it to the tribal areas of Pakistan, where they joined the Islamic Movement of Uzbekistan (IMU), an Uzbek militant group with strong ties to al Qaeda, according to German intelligence officials.

One member of the group was Rami Makanesi, 25, a German of Syrian descent. Another was Shahab Dashti, a German citizen of Iranian descent. He appeared in an IMU video in late 2009. Wielding a knife and gun, he urged other Germans to join in jihad against U.S. forces in Afghanistan. Several other Germans in the video were shown firing weapons in what appeared to be live-fire exercises. Several scenes featured what appeared to be the group's members using rockets and guns to practice storming enemy positions, honing the type of combat skills that Western counter-terrorism officials fear could be used in Western cities in a "Mumbai-style" attack.

In November 2008, more than 160 people were killed in an assault on hotels and other "soft targets" in Mumbai by members of Lashkar-e-Taiba, a terrorist group based in Pakistan.

One European counterterrorism official said Sidiqi told his interrogators that Meziche had assumed a planning role in the new reported plot -- assisted by Asadullah M. -- which Osama Bin Laden himself approved. Sidiqi said that Dashti, who appeared in the IMU video, was tasked to be a "foot-soldier" in the plot against Europe, the European counterterrorism official told CNN. German intelligence officials believe Dashti is still at large in the tribal areas of Pakistan.

Dashti, who previously followed a Western lifestyle, began attending the Taiba mosque after converting from Shia to Sunni Islam, in part, German intelligence officials said, to distance himself from a domineering father.

Family members reached by CNN over the weekend said they believe he was tricked by extremists into going to Pakistan. His wife traveled with him to Pakistan and is still believed to be in the Afghan-Pakistan border region.

The imam of the Taiba mosque is Mamoun Darkazanli, a German businessman from Syria who was identified by the 9/11 Commission as having links to al Qaeda financiers. Spanish authorities charged him in 2003 with membership in al Qaeda, but as a German citizen he was not extradited. He faces no charges in Germany. Attempts by CNN to reach Darkazanli for a response on the latest plot have been unsuccessful.

In the years after 9/11 the Taiba mosque became a magnet for al Qaeda sympathizers across Europe. "They all wanted to come and pray where Mohamed Atta prayed," a German intelligence official told CNN.

Hamburg authorities shut the mosque a few weeks after Sidiqi was arrested. The decision to shut the mosque was difficult, said officials in Hamburg, because the presence in one place of so many militants made it easier to monitor their activities. But they said the mosque had become a recruiting center for jihadists across Europe.

Several militants now back in Germany who failed to make it to Pakistan's tribal areas are of continuing concern to members of German intelligence services, who have kept them under observation.

"Their greatest enemy is the United States," a German intelligence official told CNN.

A recent report by Hamburg's intelligence services said that 45 jihadists lived freely and openly in the city, from where they supported al Qaeda. High evidence thresholds under the German legal system have made it very difficult for authorities to make arrests, German officials told CNN. In addition to those actively supporting al Qaeda, another 200 Islamists living in the city are described as having "violent tendencies."

German intelligence officials told CNN that Hamburg, like many other European cities, faces a challenge from Islamist extremists, but that some cities, including London, face greater challenges. They said they are increasing resources to confront the problem of Islamist extremism.

Radicalization, they said, is on the rise because of the growth of German-language extremist websites and the revolution in social media. A senior German counterterrorism source told CNN that some 200 people have left the country since 9/11 to receive training with militant groups in the Afghanistan-Pakistan border region, and that dozens have returned.

According to German intelligence officials, the uptick in U.S. drone strikes in the tribal areas of Pakistan has not stanched the enthusiasm of German militants wishing to travel there.