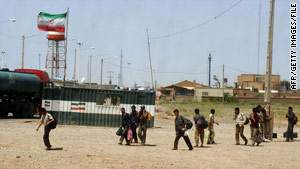 The Iranian flag flies over the the country's border with Afghanistan.
STORY HIGHLIGHTS
RELATED TOPICS

Kabul, Afghanistan (CNN) -- Authorities in southwestern Afghanistan have seized 19 tons of explosive devices that had been transferred across the border from Iran, police said.

The devices had been placed in 337 boxes inside a 40-foot shipping container transferred from Iran over a bridge linking Afghanistan and Iran, he said.

The information came from an "Iranian source" whose tips on past shipments have been verified by the United States, the official said in April.

The official also noted that Iran -- a majority Shiite country -- and the Sunni Taliban almost went to war with one another in the late 1990s, so it's not really in their interest to be a major source of top-shelf arms to the Taliban.

Tehran has consistently denied supporting groups opposed to the Afghan government. U.S. and coalition troops have found evidence of some Iranian weapons inside Afghanistan in seized caches or in the aftermath of attacks.