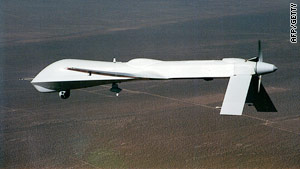 A file photograph of a 'Predator' drone similar to the type used by the U.S. military in Afghanistan and Pakistan.
STORY HIGHLIGHTS
RELATED TOPICS

Islamabad, Pakistan (CNN) -- Pakistan criticized the increase in suspected U.S. drone attacks Thursday, saying they undermine Pakistan's efforts to win over the people in the country's tribal region, where most of the strikes take place.

"We believe, strongly believe, that these drone attacks are counter-productive and not serving the larger strategic interests, especially in the context of our efforts to win hearts and minds which is part and parcel of winning, part and parcel of our strategy against militants and terrorist," Abdul Basit, foreign ministry spokesman said.

One U.S. official said recently that the CIA has stepped up missile strikes in Pakistan, and the uptick in drone attacks is based on precise intelligence.

The United States does not officially comment on suspected drone strikes. But it is the only country operating in the region known to have the ability to launch missiles from drones -- which are controlled remotely.

September has seen more attacks than any other month since the unmanned aerial strikes began.

The majority of the strikes this year have hit targets in North Waziristan.

While suspected militants have been killed, the strikes have also caused some civilian casualties.

The civilian death toll has angered Pakistanis, less than a tenth of whom support the strikes, said Peter Bergen, CNN's national security analyst.

According to a count kept by New America Foundation, a Washington-based think tank of which Bergen is a fellow, the drones program in Pakistan has reportedly killed more than 1,000 people since 2004.