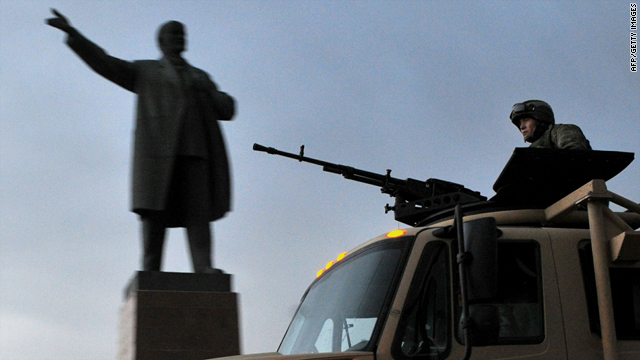 (CNN) -- Polls closed Sunday in the poor but strategically important Central Asian nation of Kyrgyzstan as citizens turned out to elect a new parliament, after a year that has seen the president flee the country and ethnic riots that left hundreds dead.

"The polls have been closed and we can say now that with the help of the local offices of the Election Commission and the overall effort of the Central Electoral Commission we managed to organize the parliamentary elections without any major incidents," said Klara Sooromkulova, member of the election commission.

International monitors had not reported any major complaints on election day, though local observers from the political parties were more vocal with their concerns, Sooromkulova said.

Voter turnout was high, especially in the south of the country, she said, including a 56 percent turnout in the capital, Bishkek.

The new government will have to rebuild "the entire infrastructure of the government, as well as the rebuilding of social cohesion and trust between ethnic groups," said Kanat Saudabayev, a top official with the Organization for Security and Cooperation in Europe, which has election monitors in Kyrgyzstan.

President Kurmanbek Bakiyev was deposed in April and was replaced by Roza Otunbayeva, who became the first female president of a Central Asian nation.

Two months later, at least 356 people were killed and about 400,000 fled their homes in a wave of violence between ethnic Kyrgyz and Uzbeks.

Shortly after that, Kyrgyz voters approved a new constitution that puts more power in the hands of parliament, reducing the president's role.

"Following the June situation of unrest and violence, it was not easy to organize the elections," Sooromkulova said.

Kyrgyzstan hosts a United States air base which is an essential supply route for NATO personnel and equipment into Afghanistan, called Manas Transit Center, as well as a Russian military base, Kant, just outside of the capital Bishkek.

The OSCE is due to make a preliminary statement about the elections on Monday.

Nearly 2.9 million people are eligible to vote for 120 lawmakers in a parliament called the Jogorku Kenesh, the Central Election Commission said.

There are 850 international election observers representing 32 organizations and 52 countries.

CNN's Bharati Naik and Mila Sanina contributed to this report.