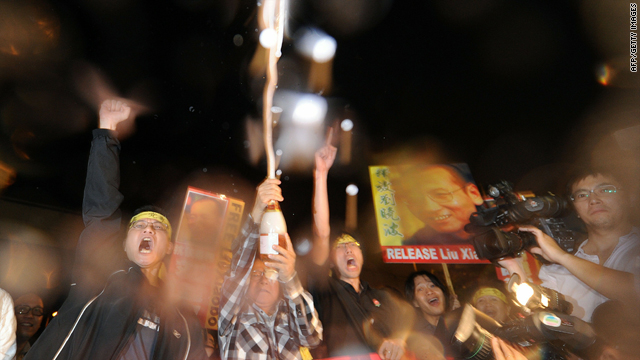 Hong Kong, China (CNN) -- A woman celebrating the awarding of the Nobel Peace Prize to a Chinese dissident has been charged with assault for accidentally splashing champagne on a security guard outside the Chinese central government's liaison office in Hong Kong.

Ip, who was arrested Sunday afternoon, made her comments in Cantonese.

The security guard was not injured, but he made a complaint, so Ip was arrested and charged with common assault, said Hong Kong police spokesman Lawrence Li.

"This is an absurd case," said Law Yuk-kai, director of Human Rights Monitor, a group based in Hong Kong. "This just shows who's the boss," Law said, referring to the mainland Chinese government.

The British returned Hong Kong to China in 1997, with China's promise that Hong Kong could continue to govern itself for the next 50 years. But critics of Beijing say the mainland government has encroached on Hong Kong residents' rights and interfered with the special administrative region's government.

Ip was released on her own recognizance and is to appear before police in late November, said the police spokesman.

She and others were celebrating the Nobel victory of Chinese dissident Liu Xiaobo, who is serving an 11-year prison sentence after repeatedly calling for human rights and democratization.

Liu was sentenced in 2009 for inciting subversion of state power. He is the co-author of Charter 08, a call for political reform and human rights, and was an adviser to the student protesters at Tiananmen Square in 1989.

The Norwegian Nobel Committee awarded the prize to him on Friday.

A Chinese foreign ministry spokesman said the awarding of the prize to Liu was "blasphemy against the peace prize" that could harm relations between China and Norway.

A record 237 names were submitted for the 2010 Nobel Peace Prize, the Nobel committee said. Thirty-eight of the nominees are organizations. Nominees are not revealed for 50 years.