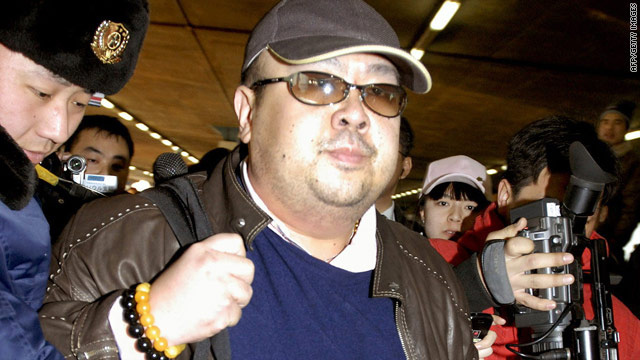 (CNN) -- North Korean leader Kim Jong Il's eldest son is against his family holding power in the reclusive communist nation for another generation.

"Personally I oppose the hereditary succession for three generations," Kim Jong Nam told Japan's TV Asahi in an interview that aired Tuesday. "But I presume there were internal reasons. We should abide by such reasons if there are any."

Kim's comments were the first since his younger half-brother Kim Jong Un was promoted to the rank of four-star general just before a rare meeting of the country's ruling party this month. The announcement was the first formal mention of his name in official state communications. He was also named vice chairman of the Workers Party of Korea's central military commission.

Following a suspected stroke in the summer of 2008, Kim Jong Il has appeared to be in frail health, fueling heated speculation in South Korea and elsewhere about when he will name his successor and who it will be. Since early 2009, a range of signs has pointed at Kim Jong Un as that man.

"I presume my dear father decided [his brother's succession]," Kim Jung Nam said in the TV Asahi interview that was recorded in Beijing Saturday. " I have no objection nor interest on the succession. I do not care about it at all."

At one point, the eldest Kim Jung Nam was considered the top candidate to succeed his father before he fell out of favor after he got caught trying to sneak a trip to Tokyo Disneyland using a forged passport.

"I would like my younger brother to do his best for the people of North Korea and their true wealth," Kim said. "I am ready to help him from outside of North Korea whenever he needs my help."