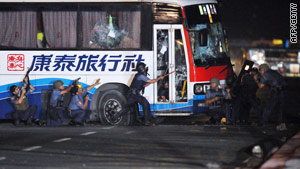 The death of the tourists created a furor in Hong Kong, where people watched the botched operation unfold live on TV.
STORY HIGHLIGHTS

(CNN) -- The Philippine government will pursue administrative sanctions, rather than criminal charges, against officials involved in a botched hostage rescue that left eight tourists from Hong Kong dead, the country's president said.

President Benigno Aquino rejected the severest of recommendations from an independent investigative committee that had looked into the August 23 standoff. The panel had proposed criminal or administrative charges against top police officials and three television networks.

-- Manila Mayor Alfredo Lim should be sanctioned for neglect and misconduct in office.

-- Police Chief Superintendent Rodolfo Magtibay should be sanctioned for gross incompetence and serious neglect of duty.

-- Chief hostage negotiator Orlando Yebra should be sanctioned for neglect of duty.

-- Deputy Ombudsman Emilio Gonzales III should be sanctioned for gross neglect of duty and/or inefficiency in the performance of official duty.

Gonzales also should be investigated on a bribery allegation made by hostage-taker Rolando Mendoza.

Mendoza was a decorated police officer, but his career spiraled downward when he was dismissed a year ago for extortion. He was killed during the botched rescue.

The president also recommended that four journalists be referred to a Philippine broadcast media group to determine whether they violated journalistic standards.

The death of the tourists created a furor in Hong Kong, where people watched the botched operation unfold live on TV.

Philippine authorities have blamed the live TV broadcasts for contributing to the deaths.