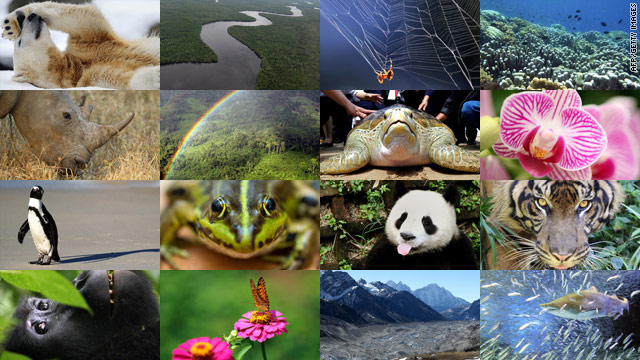 (CNN) -- Delegates from all over the world descended on Nagoya in Japan on Monday for talks considered crucial to sustaining the future of animal, plant and human life on Earth.

For two weeks, delegates at the 10th meeting (COP10) of the Convention on Biological Diversity will attempt to agree a 20-point plan for the next decade following the comprehensive failure of any government to meet previous targets set out in 2002.

"Nagoya is the main global event to communicate the value of nature and the costs of its loss to the whole world," Pavan Sukhdev, special advisor and head of UNEP's Green Economy Initiative told CNN.

What is the Convention on Biological Diversity?

The U.N.'s Convention on Biological Diversity (CBD) is a legally-binding treaty consisting of 193 members or "Parties" (192 governments plus the European Union).

It was set up at the Earth Summit in Rio de Janeiro in 1992 and came into force in December 1993.

Its stated aims are to conserve and sustain biodiversity, while trying to promote a "fair and equitable" sharing of benefits made from plant and animal life.

Why is the summit so important?

Ecologists and politicians agree that the planet's ecosystems are in crisis. The U.N.'s third Global Biodiversity Outlook (GBO-3) -- published in May 2010 -- painted a depressingly bleak picture of biodiversity loss in recent times.

"Alarming" declines in natural habitats (freshwater wetlands, sea ice, salt marshes, coral reefs), vertebrate species (down by a third in the past 35 years) and genetic diversity were recorded.

The targets set out in 2002 to achieve "a significant reduction of the current rate of biodiversity loss at the global, regional and national level..." by 2010 were not met by any government, the report said.

The losses were, concluded GBO-3, of "profound concern" which has "major implications for current and future well-being."

More recently, WWF's biennial Living Planet report published in October said "our demand on natural resources has doubled since 1966, and globally, we are using the equivalent of 1.5 planets to support our activities."

What's being discussed in Nagoya?

The primary goal is to agree a new 20-point Strategic Plan for the next decade (2011- 2020) setting new targets for conservation and sustainable uses of biodiversity, as well as fleshing out a long-term vision up to 2050.

In addition, delegates will try to finalize a protocol on Access and Benefit-sharing (ABS) -- the equitable sharing of benefits from the world's genetic resources.

Jim Leape, director general of WWF said a protocol on ABS which "recognizes the interests of the biodiversity-rich countries and ensures the rights of indigenous peoples...is long overdue."

The results of "The Economics of Ecosystems and Biodiversity" (TEEB) study will also be presented in Nagoya. Governments will be urged to endorse and implement TEEB's recommendations.

The three-year study has investigated ways of placing economic values on some of the services nature provides (e.g. natural flood defenses, like mangroves and crop pollination).

At the convention, the United Nations also plans to launch a new independent international body charged with monitoring biodiversity.

The Intergovernmental science-policy Platform on Biodiversity and Ecosystem Services (IPBES) will provide periodic assessments of ecosystems and will operate in a similar way to the U.N.'s Intergovernmental Panel on Climate Change. It is also hoped IPBES will also provide training for environmental scientists in the developing world.

What are the chances of success?

The scientific evidence detailing the decline in biodiversity is seemingly unambiguous. So it would be reasonable to expect that -- in this, the U.N.'s International Year of Biodiversity -- world leaders will want emerge from the summit with some concrete plans and avoid a rerun of the widely perceived failure of last year's climate change talks in Copenhagen.

What do conservation groups think?

Claus Mayr, director of European Affairs at the Nature and Biodiversity Union (the German branch of Birdlife International) told CNN: "The most urgent need is the adoption of the Strategic Plan and the second is a binding protocol on ABS. Thirdly, rich countries like ones in Europe need to speak with one voice and put money on the table."

"The major thing that needs to happen is that the resources, the political will and the understanding of the value of biodiversity and ecosystem services have to become more widespread," Aveling told CNN.

"If you think what we put into as a global community into education, we do that because we value it. If we could put anything like that into biodiversity we might have a chance."

Politicians and conservationists need "to illustrate the dependency we have on biodiversity," Aveling says.

"Political will is very heavily dependent on the popular will. Biodiversity is still too remote from people's self-interest. The importance of biodiversity and ecosystem services is just not getting out there," she said.

Are the proposed targets ambitious enough?

Conservation International is urging leaders to commit to greater protection saying a quarter of the world's land should be protected to avert an environmental crisis.

This is at least five percent more than the target the CBD is hoping to agree at Nagoya. And there are other scientists who think that the summit's ambitions could be broadened.

Experts assembled by the Paris-based research group DIVERSITAS believe that the CBD's strategic plan could be "strengthened."

While DIVERSITAS acknowledges that CBD's incorporation of targets and indicators is "a very positive step," it suggests the plan could be enhanced by a color-coded system to identify priorities.

Understanding and governance of biodiversity and ecosystems would be classified as "blue" targets under the proposal.

Simply expanding the protection of valuable natural assets might not be enough, says PBL, when set against population growth and greater access to prosperity.

The report calls for "structural changes in production and consumption" in the agriculture, fishing, forestry and energy sectors.