31 dead in China coal mine leak 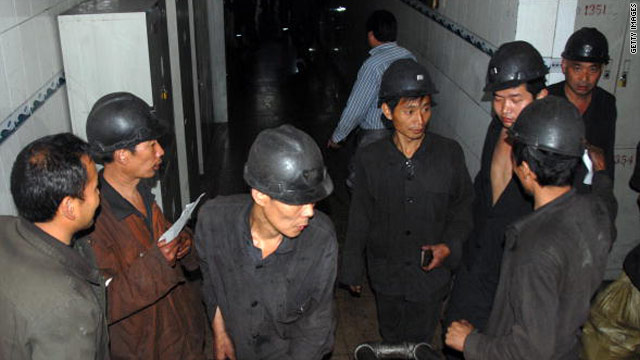 Some of the 239 miners who made it to the surface after the mine accident in central China's Henan province on October 16.
STORY HIGHLIGHTS

(CNN) -- The death toll from a coal mine gas leak in central China rose to 31 Monday with the discovery of five more bodies, state media said.

Six other miners remain trapped underground, but their chances of survival are slim, rescue crews fear. The six have been identified, according to the state-run Xinhua news agency, citing a spokesman with the rescue headquarters.

More than 2,500 metric tons of coal dust smothered the pit after the gas leak, hampering efforts to reach the miners, said Du Bo, deputy chief of the rescue headquarters, according to Xinhua.

The gas leak occurred in Henan province when 276 miners were working underground. A total of 239 workers escaped, Xinhua said.

An initial investigation showed that 173,500 cubic meters of gas leaked out in the accident.

The same mine reported another explosion in August 2008 that killed 23 miners.

China has one of the world's deadliest records for miners, with poor safety standards accounting for thousands of deaths each year.

Last week, China announced it had closed 1,355 small coal mines this year, Xinhua said. The effort was part of a larger plan by the National Energy Administration to restructure the mining industry to prevent deadly accidents and reduce greenhouse gas emissions, the news agency said.