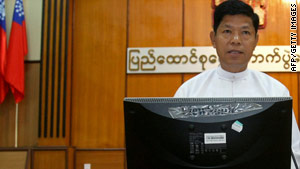 (CNN) -- Myanmar will not allow international monitors to oversee its elections next month.

"Since we have many experiences in election, we don't need experts on this issue," said Thein Soe, chairman of the election commission told foreign diplomats and reporters Monday.

"And since we have all ambassadors who are representing their countries, we don't think we need to invite any special group to observe the election since all the ambassadors are here and can watch it on election day," he added.

The country, which is also known as Burma, has been under military rule since 1962. Critics say the November 7 elections -- its first in two decades -- aim to create a facade of democracy.

The constitution requires more than 100 military nominees in parliament, which critics say is aimed at tightening the regime's grip on Myanmar.

Democracy activist Aung San Suu Kyi has said she will not vote in the elections.

Her party won a landslide election victory in 1990, but the military junta rejected the results.

The regime recently passed a law that made Suu Kyi ineligible to run because of a court conviction. The Nobel laureate has called the law unjust.

A Myanmar court convicted Suu Kyi in August 2009 for breaching the terms of her house arrest after American John Yettaw swam uninvited to her lakeside house in Yangon and briefly stayed there.

Her ongoing detention was extended to November 2010, and in February a court rejected her appeal for release.

Her supporters have said the conviction was a way to remove her from the election campaign.

The new law forced Suu Kyi's party, the National League for Democracy, to choose between honoring her as its leader and risking the party being declared illegal -- or ejecting Suu Kyi from the party and contesting the election.

It decided to skip the race.