Typhoon heads for China after killing 11 in the Philippines 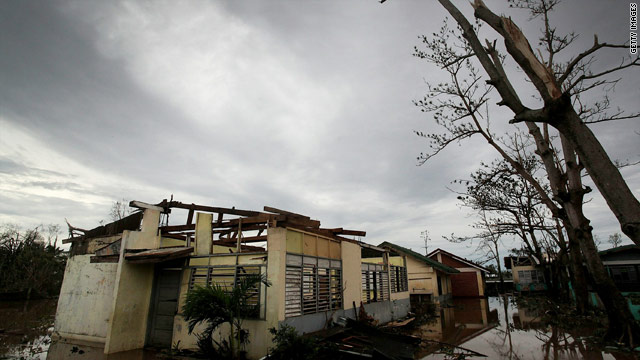 A school damaged by Typhoon Megi sits among the debris on October 19 in San Jose, Philippines.
STORY HIGHLIGHTS

Trains from Sanya to other provinces were canceled until Thursday, while trains heading from other provinces to Sanya will stop at Guangzhou, capital of Guangdong province, the Xinhua news agency reported.

Megi may be the strongest typhoon to hit China this year, Xinhua said. It is expected to make landfall in Hainan or Guangdong province on Saturday, Xinhua said.

The death toll in the Philippines from Megi has climbed to 11 as the powerful storm moved away from the country.

According to civil defense officials, the fatalities were for various reasons, including falling trees, drowning and lightning.

Parts of the Philippines could still be vulnerable to mudslides and landslides.

The typhoon could approach Hong Kong and mainland China in the next few days.

Megi is expected to lash Hainan and Vietnam.

Southern provinces such as Hainan, Guangdong and Fujian are gearing up for heavy rains and strong winds, state media said.