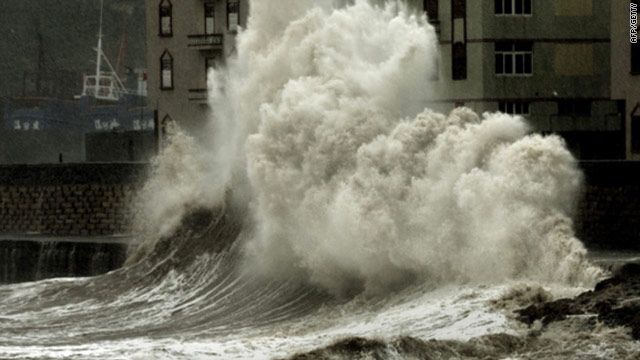 Waves crash into a waterfront wall in Zhangpu on October 23, 2010 in Fujian province, China.
STORY HIGHLIGHTS

Are you affected by the typhoon? Share your images with CNN.

(CNN) -- Typhoon Megi hit China on Saturday, sending hundreds of thousands fleeing as it made landfall in the southeastern province of Fujian, state media reported.

About 270,000 people have been evacuated, Xinhua news agency said.

The fourth typhoon to hit China this year made landfall in Zhangzhou city. It forced the cancellation of ferry services and 79 flights in the coastal city of Xiamen, authorities said.

It is expected to lose strength as it heads inland, but will bring heavy rains to southeastern provinces.

Officials have issued the warnings as they brace for possible devastation in coastal areas, Xinhua said.

Meanwhile, the typhoon killed 11 people in Taiwan and left about 400 tourists stranded. At least 200 of the tourists were from the Chinese mainland, Xinhua said.

In Taiwan, the typhoon was downgraded to a tropical storm after it made landfall in China.

At least 23 people on Chinese tour groups were listed as missing, Taiwan's official Central News Agency reported. Rescuers were searching for the missing and providing food to other stranded tourists trapped on the mountainous region of northeastern Taiwan.

Heavy rains will ease in Taiwan on Saturday, according to the meteorological department.

The typhoon affected an estimated 258,844 Filipinos, leaving thousands homeless, when it hit the island earlier this week.