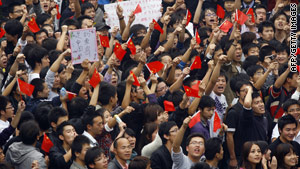 The dispute over the islands has resulted in widespread protests in both China and Japan.
STORY HIGHLIGHTS
RELATED TOPICS

Tokyo, Japan (CNN) -- The Japanese government lodged a protest with the Chinese government Monday about the alleged presence of Chinese patrol boats near disputed territory, according to Japanese media.

Both countries claim sovereign rights to the islands called the Senkaku Islands in Japanese and the Diaoyu Islands in Chinese.

The boats were in Japan's "contiguous zone" but did not cross into Japanese territorial waters, Kyodo reported, sourcing Japan's coast guard.

But Japan's Chief Cabinet Secretary Yoshito Sengoku said in the protest message to China that seeing Chinese patrol boats made his government feel "uncomfortable," according to Kyodo.

China's foreign ministry has claimed that its boats' patrols are both legal and based on need.

Japan's Chief Cabinet Secretary Yoshito Sengoku said Monday that Japan will step up its monitoring activities around the Islands, according to Kyodo.

Japan will add six submarines to its current fleet of 16 during the next four years as it sees increased naval activity from Asian neighbor China, according to news reports from Tokyo last week.

Diplomatic tensions peaked in September after Japanese authorities arrested a Chinese fishing captain near the islands and detained him for more than two weeks.

The battle escalated into diplomatic threats by Beijing, the suspension of diplomatic talks and canceled trips between the nations.

High level military talks between the two powers that had been suspended over the row restarted October 11 but with little talk about islands, because it was "not very productive," as one Japanese defense official said.

Japanese opposition politicians have called for Internet search engine Google to drop the Chinese name from its maps and were quickly joined by Japan's foreign ministry. Anti-Japan protesters in China turned violent over a week ago, vandalizing Japanese businesses and cars.

On Monday, the Chinese Embassy in Tokyo received an envelop containing a bullet and a protest document, Kyodo reported -- the second such protest this month.

China and Taiwan have began aggressively challenging Japan's claims to the islands in 2003, according to the CIA World Factbook, as well as to surrounding seas, "where all parties engage in hydrocarbon prospecting."