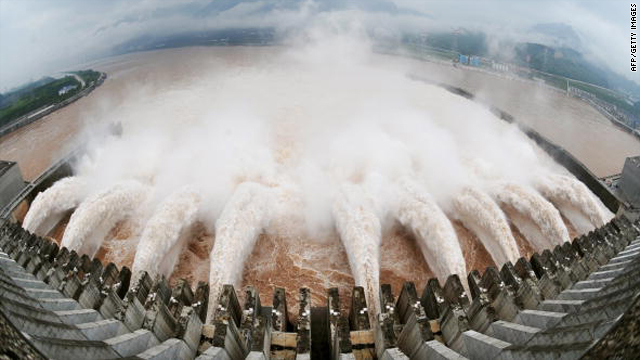 A picture shows this year's biggest release of water from the sluice for flood prevention at the Three Gorges Dam in Yichang, central China's Hubei province, on July 20.
STORY HIGHLIGHTS
RELATED TOPICS

The water level hit the dam's design capacity of 175 meters (574 feet) at 9 a.m. Tuesday, said the corporation that developed the dam.

The 175-meter milestone will "enable the project to fulfill its functions of flood control, power generation, navigation and water diversion to the full," said Cao Guangjing, chairman of the China Three Gorges Corporation.

When the dam in central China reaches full generating capacity next year, it will produce 84.7 billion kilowatt-hours of electricity, the Xinhua news agency said. That's enough to meet Beijing's needs for a year.

By comparison, the United States' Hoover Dam produces about 4 billion kilowatt-hours each year, enough to serve 1.3 million people in Nevada, Arizona, and California.

The 2,309-meter-wide (1.4 mile-wide) Three Gorges project, built in the upper-middle reaches of China's longest river, began storing water in 2003. Water is diverted to the parched farmlands and cities of China's north.

The Yangtze River has been responsible for some of the worst floods on record, with hundreds of thousands of people killed over the past century alone. The Three Gorges Dam relieves 15 million people and 1.5 million hectares of farmland in the Jianghan Plain from the threat of flood, the developer says.

Critics say the dam worsens pollution by trapping sewage and industrial waste. They also warn that an accident or natural disaster could create a catastrophe in the densely populated region. Smaller dams could have met China's needs, critics say.

An estimated 1.2 million people had to move to make way for the Three Gorges, which inundated 632 square kilometers (244 square miles) of land. Historians decried the loss of centuries of relics and antiquities, and the loss of a way of life for myriad rural residents in hundreds of villages, towns and cities.