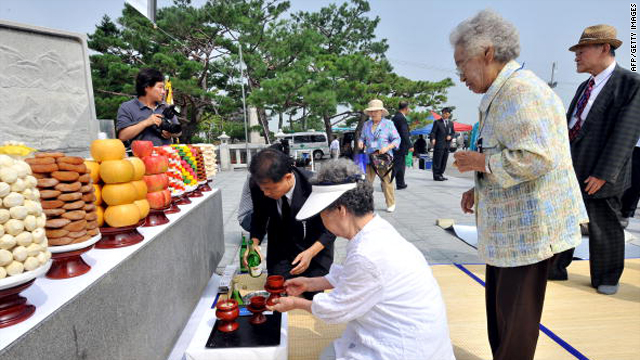 Elderly South Koreans, who were separated from their families during the 1950-53 Korean War, hold a traditional ritual for their deceased relatives at Imjingak peace park in Paju in North Korea, near the inter-Korea border, on September 14.
STORY HIGHLIGHTS
RELATED TOPICS

(CNN) -- North Korea has requested record shipments of rice and fertilizer in exchange for concessions on reuniting families separated by the Korean War nearly 60 years ago, the Yonhap news agency said Wednesday.

Pyongyang made its request at two-day talks between the two Koreas that ended Wednesday in the border town of Kaesong.

Seoul would consider the request for 500,000 tons of rice and 300,000 tons of fertilizer, but it was out of proportion with any previous aid to the communist North, Yonhap said, citing South Korean officials involved in the talks.

Pyongyang also has pushed to resume cross-border tours. Seoul stopped the tours to the Mount Kumgang resort after a North Korean soldier killed a South Korean tourist in 2008. Before that, the tours had earned North Korea millions of U.S. dollars over a decade,

The talks come ahead of family reunions slated for October 30 to November 5 at Mount Kumgang, the two countries' joint mountain resort in the North. Those reunions are to involve 100 people from each side.

Such reunions have happened sporadically since 2000, when the North and South held their first summit. Fewer than 21,000 family members have reunited since. About one-fifth of them have reunited via video. More than 80,000 South Koreans await an opportunity to reunite with loved ones, Yonhap said.

Family members wept as they saw one another for the first time in decades at the 2009 event. No mail, telephone or e-mail exchanges exist between ordinary citizens across the Korean border.

The 1950-53 Korean War ended in a truce, but without a formal peace treaty. The prickly relationship between the countries has since had periodic conciliatory moves and flare-ups.

South Korea shipped 300,000 to 400,000 tons of rice to North Korea a year before President Lee Myung-bak took office in 2008, Yonhap said. The conservative leader pledged to link aid to Pyongyang's progress on denuclearization.

Pyongyang has poured money into its missile and nuclear programs, as its people have gone hungry. Poor harvests and weather catastrophes have compounded the isolated North's problems.