China says talks with Japan have been 'ruined' 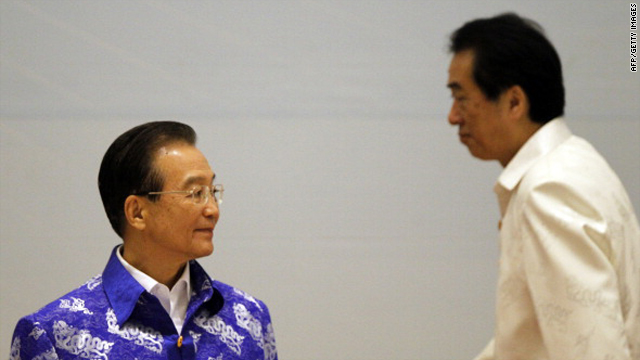 (CNN) -- A summit involving Japan and China was in jeopardy Friday after a Chinese foreign ministry official accused Japanese diplomats of making statements that violated China's sovereignty, according to the Chinese state-run news agency.

China and Japan are participating in a summit of the Association of Southeast Asian Nations in Hanoi, Vietnam, but Japanese representatives made "untrue statements about the content of a meeting between Chinese and Japanese foreign ministers held earlier in the day," the Xinhua news agency said.

Chinese Assistant Foreign Minister Hu Zhengyue said that "the Japanese move ruined the atmosphere for leaders from the two sides to conduct talks in the Vietnamese capital."

Relations between the two countries have been strained by their growing dispute over a group of islands that lies between them. Japan calls it the Senkaku Islands and the Chinese call them the Diaoyu Islands

Earlier this week, the Japanese government lodged a protest with the Chinese government after the Japanese navy spotted two Chinese patrol boats near the islands. The boats didn't cross into Japanese territorial waters but the vessels were in Japan's "contiguous zone," according to Japan's Kyodo News Agency.

China's foreign ministry has asserted that boat patrols are both legal and based on need.

Japan said it will add six submarines to its current fleet of 16 over the next four years in response to what it considers increased Chinese naval activity, according to news reports in Tokyo.

An earlier dispute occurred in September, when Japanese authorities arrested a Chinese fishing captain near the islands and detained him for more than two weeks. That action led to diplomatic threats from China and canceled trips between the two countries.

On Friday, China's Hu accused Japanese representatives at the Hanoi summit of "violating China's sovereignty and territorial integrity through statements to the media," the Chinese news agency reported.

"The truth was that the diplomatic authority of Japan, in cahoots with other nations, tried to create (noise) on the issue of the Diaoyu Islands in the East China Sea in the lead-up to the summits between ASEAN and its partners," Xinhua reported.

During the summit, Chinese Foreign Minister Yang Jiechi met with his Japanese counterpart, Seiji Maehara, and told him that "the Diaoyu Islands had been an integral part of Chinese territory since ancient times," Xinhua reported.

Hu then accused Japanese diplomats of "making untrue statements about the content of the meeting," saying that they "distorted China's stance in implementing the principled consensus between the two countries on the East China Sea issue," Xinhua said.