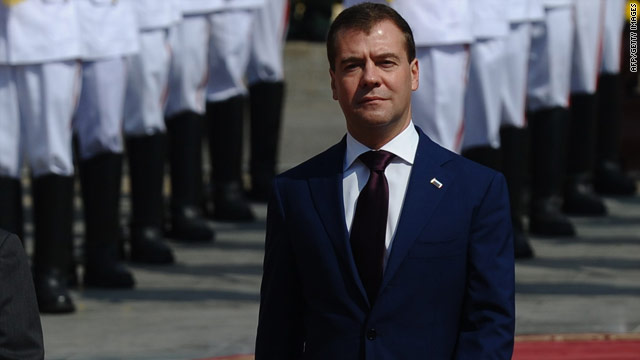 Medvedev visited the island of Kunashiri, the first time a sitting Russian president has set foot on any of the chain of more than 50 islands in the northwest Pacific.

He made the stop during an Asian tour that included a meeting of the Association of Southeast Asian Nations over the weekend in Vietnam.

"To bring the people's living standards on the islands up to the level of Russia proper, it is necessary to make sure that the services that the citizens receive in this remote region are comparable to those in ... the rest of the country," Medvedev said on state television. "It is necessary to ensure that doctors and other specialists go there."

Medvedev said on state television that after speaking with residents, he believes the islands do not have enough medical specialists, and called for a plan that would include a housing construction program to provide housing to those who choose to move there as an incentive.

The Kurils stretch between Russia in the north and Japan in the south. Following Japan's defeat in World War II, the Soviet Union in 1945 annexed the four southernmost islands, which previously belonged to Japan.

Ever since, the islands -- called the South Kurils by Russia and the Northern Territories by Japan -- have been the subject of dispute. That dispute has prevented the two countries from signing a formal peace treaty following World War II.

"It is our land," he said. "The Russian president visited Russian land, Russian territory, a Russian region. We have explained that to our Japanese partners.

The Russian Foreign Ministry said in a statement posted on its website that it told Masaharu Kono, the Japanese ambassador in Moscow, that Japan's protests over the visit were impermissible.

"It was indicated to the Japanese side that its attempts to influence the choice of domestic routes by Russian President Dmitry Medvedev were totally unacceptable and incompatible with neighbourly relations between Russia and Japan that have taken place in recent years," the statement said.

Lavrov had said earlier that the ambassador would be summoned to the ministry "and we will once again clearly and unequivocally reiterate our position. We will not take any steps that might impede the Russian-Japanese cooperation, but the Japanese side should, of course, draw conclusions."