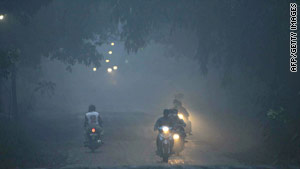 The air is thick with volcanic ash as residents flee on motorcycle in Klaten district, central Java.
STORY HIGHLIGHTS

Bodies recovered from a village about 16 kilometers (9.9 miles) from the volcano were badly burned, Commissioner Tjiptono of the Yogyakarta police told a local station, TV One.

The volcano has not stopped erupting since Thursday, the Volcanology and Geological Disaster Management Office said. An explosion Thursday night could be heard 30 kilometers (18 miles) away, and it continued to spew ash clouds.

Earlier, Mount Merapi had belched a steady stream of gas and ash, unleashing a pair of powerful eruptions into the morning sky on Thursday.

The hot clouds hovered over central Java, rising up to 2.5 kilometers (1.5 miles) and then drifting to the south toward Kali Gendol, Kali Kuning, Kali Boyong, Kali Krasak and Kali Bedok, according to the Indonesian Volcanology and Geological Disaster Mitigation Disaster Agency.

Those affected by the latest eruption lived outside the 15-kilometer (9-mile) evacuation radius that had been established. The danger zone was expanded to 20 kilometers (12 miles) after Friday's eruption.

Residents of a village 12 kilometers (7.5 miles) from the volcano were ordered to move for safety, said Sutopo Purwo Nugroho, head of risk disaster reduction.

Nearly 75,000 people have been evacuated, according to Indonesia's National Disaster Management Board.

Residents on the volcano have repeatedly evacuated, but then returned to check on their houses and farm animals and fled anew with each fresh eruption.

Because of rains, geological officials are warning residents and evacuees not to go to areas within the danger zone or near rivers.

Rainfall can convert volcanic ash to lahar, or mudflow.

There have been reports of mudflow headed down riverbeds on Merapi's slopes.