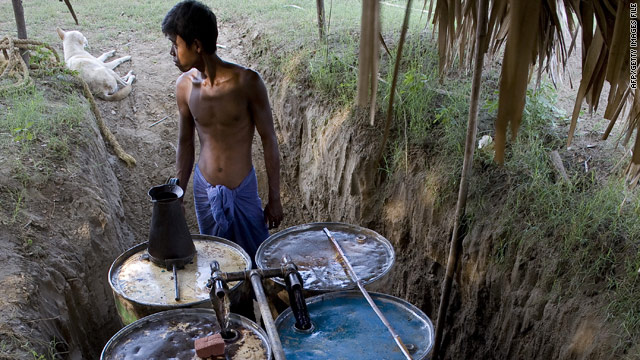 Photo taken in 2009 shows a farmer using a homemade system to filter oil residue into a kind of diesel fuel. The underground economy of Myanmar is equal to its official GDP, analysts say.
STORY HIGHLIGHTS

(CNN) -- For the first time in 20 years, the people of Myanmar will be voting for a new government. But with the ruling military's political wing virtually guaranteed a victory, critics say there is little hope the country will escape what's been described as a legacy of economic mismanagement.

"In many ways, it's the civilianization of military rule," said Danny Richards, a senior economist from the Economist Intelligence Unit (EIU). "They've been particularly poor in terms of managing the economy over the past few decades. I think that's likely to be the case for the next few years."

The two main political parties backed the by junta are the Union Solidarity and Development Party (USDP) and the National Unity Party (NUP). Both are stacked with former military leaders and businessmen with connections to the military regime. The country's most well-known opposition party, National League for Democracy, was dissolved by the government. Its famous leader, Aung San Suu Kyi, remains under house arrest.

Myanmar, also known as Burma, has been ruled by the military since a coup in 1962. Under its rule, the country has been transformed from one of Southeast Asia's largest and richest to one of the poorest in the region.

"Burma has no economic problems apart from political ones that hold it back," said Sean Turnell, a specialist on Myanmar's economy at Macquarie University in Sydney. "Burma began the 20th century the richest country in Southeast Asia. What's happened in 100 years is bad governance."

Voting in Myanmar a 'sham'?

Analysts say "bad governance" has led to the development of two parallel economies: A so-called above ground economy and a vibrant underground market that is, by some estimates, equal in size.

"The average person produces food for personal consumption," said Turnell. "They basically trade with each other at a local market or something, and don't interact in the formal economy."

Much of the official or above ground economy is driven by the country's abundance of natural resources.

"It is pretty much energy, petroleum and mining," said Richards. "That's where Myanmar is benefiting from huge demand from China, Thailand and others in the region," he said.

Myanmar has been able to grow that part of its economy, despite the presence of economic sanctions by many western countries, including the United States. The sanctions block companies and investors from doing business with the Myanmar government and ban the sale of goods imported from Myanmar. But not everyone believes the sanctions work.

"The sanctions with regards to buying goods produced in Burma like garments, wood products and what have you simply prevent the Burmese from doing business with the outside world," said Dominic Faulder, a journalist and Myanmar expert. "These sanctions don't apply to India or to ASEAN (Association of Southeast Asian Nations) or to South Korea or China. So, basically Burma is sitting with people around it who are willing to do a certain amount of trade and who will buy gas and energy from the country."

Natural gas has become Myanmar's biggest export earner, according to the EIU. It says natural gas accounts for more than 38 percent of total export revenue. Most of it goes to Thailand. China is also building pipelines to ship oil and gas from Myanmar to Yunnan province. The project is expected to be completed by 2013. India has also been investing in Myanmar's power sector, as it looks to secure future energy supplies.

Other major exports include pulses, such as chick peas and red beans, as well as teak and hardwood products.

Myanmar's official GDP numbers are not considered reliable or accurate, analysts interviewed by CNN said. But the EIU forecasts real GDP growth will be about 3.1 percent in 2010 and expand to 4 percent in 2011. That includes the energy and petroleum industry, which attract a lot of foreign investment. Strip those out, Richards said, and you are left with an economy that is going to continue to be weak.

In many ways, it's the civilianization of military rule
--Danny Richards, Economist Intelligence Unit
RELATED TOPICS

"The business environment is extremely tough still," said Richards. "You need good contacts within the military to set up new projects."

It's believed the ties between business and the military will extend beyond the election. Military rulers reportedly have been quietly selling many of the state's largest assets as they prepare for political transition.

"They have put an enormous amount of the government holdings in the hands now of private business," said Priscilla Clapp, former U.S. chargé d'affaires for Myanmar between 1999 and 2002. The secretive regime has not commented on the reports.

Clapp believes many of the country's senior generals, who are retiring from the military to join the new government, want to bring these assets with them as they transfer to civilian life.

"It's pretty crass," said Clapp. But she also says the transfer could improve conditions "to the extent that marketization brings a different set of incentives to bear on the way business and economic decisions are made," she said.