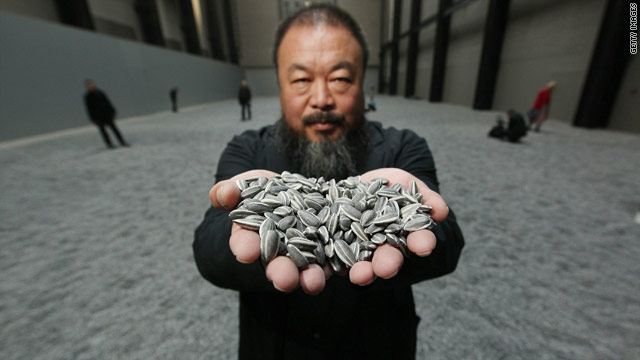 Beijing, China (CNN) -- A Chinese artist and activist said Saturday that he has been placed under house arrest for planning a demolition party to "observe" a government order to raze his studio.

Ai Weiwei said he had planned a concert and a river crab feast at the party in Shanghai on Sunday.

About 800 people were expected to attend, he said.

The term river crab is believed to make a political statement. The Mandarin word for river crab sounds like "harmonious," a word some use to describe government censorship.

Ai said he was put under house arrest until Sunday to prevent him from attending the party.

"Just recently I heard the new studio I built in Shanghai studio will be demolished all because of my activities," Ai said. "So what is my activity? My activity is very very simple, asking basic right for people to freely express themselves and also to find a new structure, a new way of communicating. Because I'm an artist this is what I do and I believe in that."

Ai said he was not allowed to leave his house, which was guarded by police.

"Please accept my deepest apologies," he tweeted to his guests in Shanghai.

Ai said he chose to "celebrate our life" since the studio was going to be razed anyway.

He has accused the Chinese government of trying to silence dissidents before.

"Simply to have different opinions can cost [dissidents] their life; they can be put in jail, can be silenced, and can disappear."

The artist helped design the iconic Bird's Nest stadium for the 2008 Beijing Olympics, but later called for a boycott of the games because he believed China was using them as propaganda.

He has also held exhibits in Europe and the United States, and his work is on display at the Tate Modern gallery's Turbine Hall in London, England.