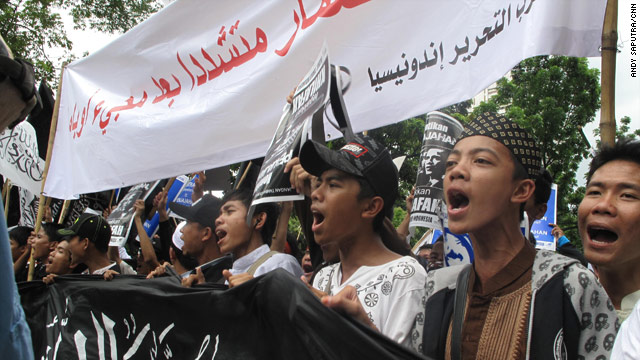 Obama is scheduled to arrive in Jakarta on Tuesday as part of a 10-day visit to Asia. These protesters yelled, "No Obama."
STORY HIGHLIGHTS

"We don't see the differences between Obama and Bush, they both oppress Muslims, they both have blood on their hands," said Ismail Yusanto, a spokesman for the Muslim group in Indonesia.

"That's why we reject Obama and we don't believe that he's reaching out to Muslims."

The spokesman said about 20,000 people attended the rallies.

With about 205 million Muslims, Indonesia is the world's largest Muslim country, according to the Pew Forum on Religion & Public Life in Washington, D.C.

More than one in 10 of the world's Muslims live there.

Although it has a reputation for being home to a relatively tolerant and easy-going brand of Islam, a Pew Forum analysis rates it as having high levels of legal restrictions on religion and religious social tension.

Government restrictions on religion are tighter in Indonesia than in Russia or Turkey, and social tensions are higher than in Nigeria or Egypt, the think tank says.

Obama is scheduled to arrive in Jakarta on Tuesday as part of a 10-day visit to India, Indonesia, South Korea and Japan.

He is expected to finalize a comprehensive partnership with Indonesia.

Obama spent part of his childhood in Indonesia.

On Wednesday, the president will visit Istiqlal mosque. He will also address the biggest Muslim nation from an undetermined location.

However, Muslims in Indonesia remain pessimistic.

"Obama can talk all he wants in Cairo and in Jakarta, the fact is that he still has his troops in war with Muslims," Yusanto said. "It's all lip service."

Protesters chanted "No Obama" and held up posters that said "Stop oppressor."

Obama's visit to Asia started Saturday with a three-day visit to India.

His visit to India -- the third largest economy and one of the world's few growth markets -- also includes meeting with Indian Prime Minister Manmohan Singh in New Delhi and addressing the nation's parliament.