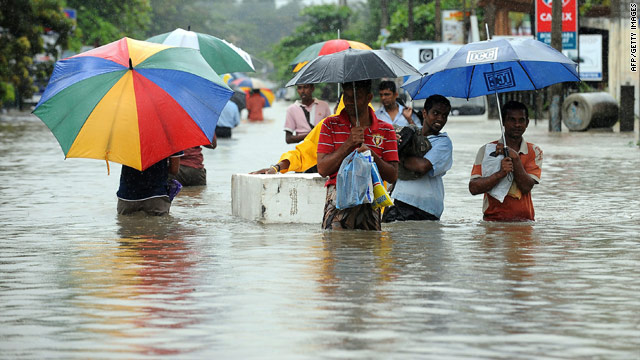 Residents walk along a flooded road in PiliyanDala, a suburb of Colombo.
STORY HIGHLIGHTS
RELATED TOPICS

The Ministry of Disaster Management said most of those affected are in the western province, which includes Colombo, the nation's capital. About 33,000 families were being housed in 11 welfare centers in the city, the ministry said.

"The government has taken immediate steps to help those affected," Construction and Housing Minister Wimal Weerawansa told CNN. "Food and other supplies were being provided. The navy was assisting those trapped in waters."

"It will be a couple of days before we make a full assessment of the damage caused," he said.

Flooded intersections and fallen trees obstructed traffic. Many workers in state and private jobs did not show up. The government said state employees would be entitled to leave.

The ground floor of the Parliament building complex was under four feet of water. However, Speaker Chamal Rajapaksa conferred with opposition parties and chose to rush through urgent legislation. That included a supplementary vote to pay salaries of state officers, a measure needed before November 15.

Rajapaksa rode to the Parliament complex in a boat provided by the navy. Other members of parliament were transported to the building by military vehicles with a high clearance, officials and police said.

"We decided to extend our support due to the exigencies of the situation," said Ravi Karunanayake, a Colombo district member of parliament for the main opposition United National Party.

He said the session was conducted in the upper floor chamber, which had no electricity. The state-owned Ceylon Electricity Board had disconnected service in several parts of the city as a precautionary measure after its distribution outlets were flooded.

The Sri Lanka navy and army made public appeals asking flood victims to contact them for relief assistance. Television and

Schools were shut down in the Western Province, the hardest hit area. The Education Ministry said examinations scheduled for Thursday were postponed.

The floods came as the government made elaborate arrangements for the November 19 ceremony in which Mahinda Rajapaksa will be sworn in for a second term as president of Sri Lanka. He convincingly won the presidential elections in January, defeating his former army commander. Foreign dignitaries are slated to attend the elaborate ceremonies, which will feature military parades and a series of other events.

Sri Lanka, known as Ceylon until 1972, is an island nation off the southeastern coast of India. Colombo, the capital, is on the western coast, bordering the Laccadive Sea.