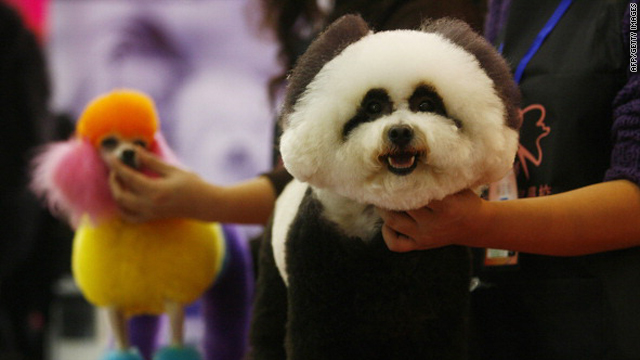 A dog accompanied by its owner prepares to take part in a pet beauty show during the sixth China Pet Fair in Wuhan in China's Hubei province on November 5.
STORY HIGHLIGHTS
RELATED TOPICS

Officials in Shanghai are considering new rules that would allow individual households only one dog because of limited living space in the densely populated city, the state-run China Daily newspaper reported Thursday.

Under the proposed law, dog owners would be required to neuter their dogs, give away their puppies to adopters or send them to government-approved adoption agencies by the time they are three months old, China Daily said.

Other Chinese cities have similar policies, the newspaper reported, including Guangzhou and Chengdu.

If passed, Shanghai's new law would go into effect next year. Violators of the law would face fines up to 1,000 yuan, China Daily said.

In 2008, government statistics recorded 18.9 million people living in Shanghai, with 2,978 residents per square kilometer of land.

Official figures showed there were about 800,000 pet dogs in the city and about 100,000 dog attack incidents annually, according to China Daily.

But local pet lovers told the newspaper the proposed policy could be hard to enforce, and could put animals at risk.

In September, officials said they planned to continue China's 30-year one-child policy, which limits most Chinese couples to one child.

China Daily reported that an estimated 400 million births have been prevented by the policy, according to official statistics.

Some Chinese couples -- such as those who are both only children, or some who live in rural areas -- have been allowed more than one child. Some critics have urged Beijing to relax the policy, saying it has skewed China's population and that better-off families have been able to bribe officials into allowing them more children.