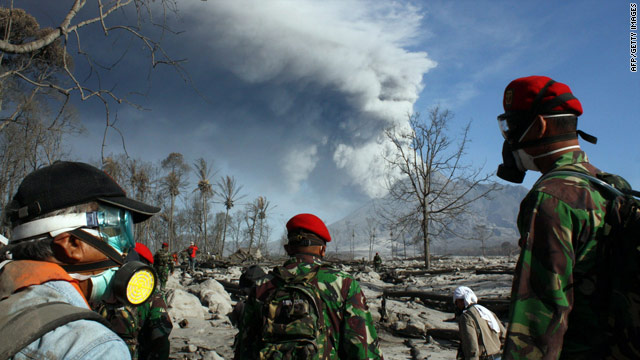 Indonesian Special Forces look for victims of the Merapi eruption in the village of Glagaharjo on November 12, 2010.
STORY HIGHLIGHTS

The death toll from the volcano's latest round of eruptions, which started October 26, has reached 206, and nearly 400,000 people have had to flee their homes, a national disaster official said Friday.

Mount Merapi, which looms on the horizon north of the major city of Yogyakarta, is located on the island of Java.

In addition, he said, a total of "380,049 people are still displaced in around Yogyakarta and Central Java."

Disaster officials said Thursday the worst may be over, but a danger zone remains within a 20-kilometer (12.2-mile) radius of the volcano.

Flights returned to normal Monday, but U.S. President Barack Obama was forced to cut short his visit to Indonesia this week because of the volcano's ash cloud.

Volcanic material from Friday's eruption could travel quite far, emergency officials said, because previous lava flows have destroyed trees and any other obstacles.

President Susilo Bambang Yudhoyono has called the volcano eruptions a crisis situation. Over the weekend, he and several of his ministers visited Yogyakarta to oversee relief efforts.

The volcano has a summit elevation of nearly 3,000 meters (10,000 feet). It is one of Indonesia's most active volcanoes and lies in one of the world's most densely populated areas.

Many people continue to live in the shadow of the volcano, raising crops and livestock.

The president has announced that residents will receive compensation for livelihoods and animals lost to the eruptions. The government will buy endangered cows on the volcano, Yudhoyono said. Many of those who live on its slopes risked their lives by staying or returning to feed their cows during lulls in the volcanic activity.