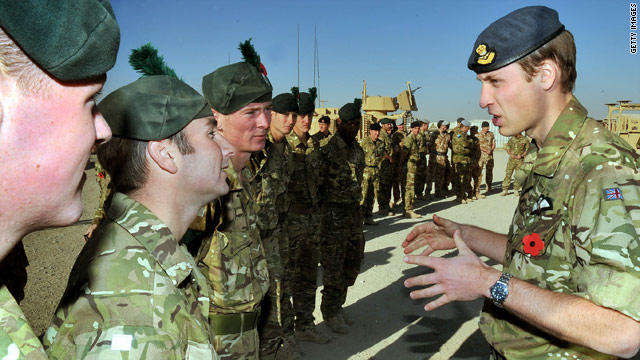 The prince attended the service at Camp Bastion, the main British military base in Afghanistan, along with Liam Fox, Britain's Secretary of State for Defense, according to Clarence House.

"Prince William laid a wreath to pay homage to British and Commonwealth sailors, soldiers and airmen who have fallen in battle," the statement said.

Fox and the prince, the second in line to the British throne, also attended a parade and spent the morning meeting with troops from the NATO-led International Security Assistance Force, and visited Camp Bastion's medical center.

"Remembrance Sunday is a time when the entire country stops to recognize the sacrifices made by the Armed Forces on our behalf," Fox said in the statement. "I am extremely proud that Prince William and I could come to Camp Bastion to stand alongside the men and women serving in Afghanistan today. I pay tribute to them and everyone who has served before them in this conflict and others on behalf of the freedoms that the British people enjoy."

Prince William departed for the United Kingdom soon after the Remembrance Day parade, according to Clarence House.

The visit was the prince's second to Afghanistan. He previously visited in April 2008.

William is a search-and-rescue pilot with the Royal Air Force, where he holds the rank of flight lieutenant. He is posted to RAF Valley, the station on the island of Anglesey in north Wales. He is known as Flight Lieutenant Wales within the British air force.