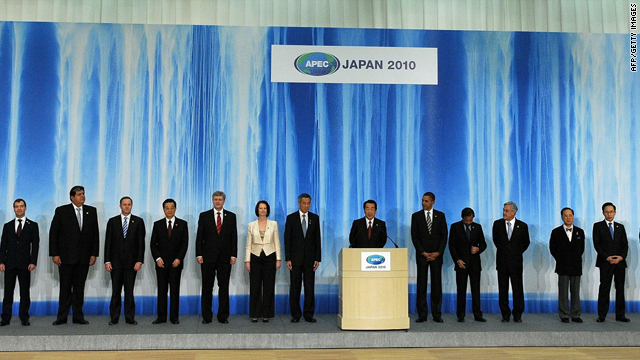 APEC leaders said in a joint statement they would take steps toward a trans-Pacific trade treaty.
STORY HIGHLIGHTS

"We reaffirm our unwavering commitment to achieving free and open trade and investment in the region," the leaders said in a joint statement at the end of their two-day summit in Yokohama, Japan.

The summit brought together 21 leaders from countries around the Pacific Rim.

But the group acknowledged challenges in the global economy and the environment.

"The Asia-Pacific regional economy is recovering from the recent economic and financial crisis, but uncertainty still remains," the leaders said. "We also face heightened challenges with regard to the protection of our environment and natural resources, including the necessity to jointly address climate change."

The summit also included the first formal talks between the Japanese prime minister Naoto Kan and the Chinese president Hu Jintao since a territorial dispute in September strained relations between the two.

This weekend marks the end of Obama's 10-day trip to Asia aimed at opening "new markets for American products in this fast-growing part of the world," according to his weekly address. He headed back to the United States on Sunday.

At the summit, Obama added, "In the 21st century, there is no need to view trade, commerce or economic growth as zero-sum games, where one country always has to prosper at the expense of another. If we work together and act together, strengthening our economic ties can be a win-win for all of our nations."

Obama has also pushed the Trans-Pacific Partnership, which is seen as a building block in trying to create a free-trade area in the Pacific Rim. The TPP would cut import tariffs for several countries.

The United States is scheduled to host next year's APEC summit in Hawaii.