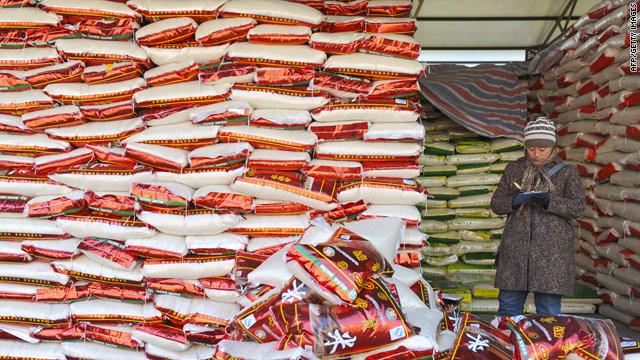 Government actions might include food subsidies, price limits, reinforced punishment for speculating on food, and steps to prevent hoarding, China Daily said. Mayors also might be forced to account for insufficient vegetable supplies and volatile prices.

Inflation in China is rising so quickly that it's sending shoppers across the border, to Hong Kong. Mainland Chinese are returning with necessities such as meat and produce, as much as they can carry on a train ride.

While in Hong Kong, which is a day trip from parts of mainland China, shoppers also can save by grabbing a meal at McDonald's. The fast-food chain is raising menu prices in China by as much as 1 yuan [15 cents US] per item because of rising food costs. McDonald's is keeping prices in check in Hong Kong.

The chain, with more than 1,000 outlets in China, is raising prices there for the first time this year, Xinhua said.

In 36 Chinese cities, the average wholesale prices for 18 kinds of vegetables have surged by 62.4 percent from a year earlier, the Ministry of Commerce said.

Chinese doing marketing in Hong Kong also are loading up on necessities such as toilet paper, diapers and shampoo. With their hands full, they shop busily at supermarkets, sundry stores and produce markets, especially near train stations.

One woman described significant savings, such as oranges selling for about twice the price in China, as compared with Hong Kong.

China's Ministry of Commerce has sold 62,400 tons of pork and 210,000 tons of sugar from reserves since the end of September, in an attempt to stabilize food prices.

The ministry also says it will work with other government agencies to try to cool inflation, according to China Daily.

The country drew about $7.7 billion in foreign direct investment in October, up 7.9 percent from a year earlier, China Daily said.

Hong Kong is a special administrative region of China, which generally governs itself. The Hong Kong dollar is pegged to the U.S. dollar, unlike China's yuan, or renminbi.