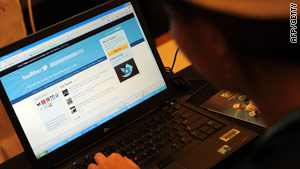 (CNN) -- A Chinese woman has been sentenced to a year in a labor camp for retweeting a Twitter post that mocked Chinese protesters who smashed Japanese products during a recent demonstration, her fiance said Thursday.

On October 17, Cheng Jianping, under the username wangyi09, added a few words to a message written by her fiance, before resending it on Twitter.

Eleven days later on the day the couple had planned to marry, Cheng's fiance, Hua Chunhui was taken away by the police from his office in the southeastern city of Wuxi.

Although he was released 5 days later, Hua hasn't seen Cheng since. He learned from her family that she was taken away by the police from in front of the couple's apartment on the same day as his arrest.

Cheng, 46, was sentenced to one year in a Henan Province labor camp for disturbing social stability.

Hua said that the tweet was simply meant to be satire, with no intention of inciting anti-Japan sentiment. The Twitter message mocked young protesters who smashed Japanese products during a recent demonstration and suggested they smash the Japan Pavilion at the Shanghai World Expo.

"This is ridiculous and a typical case of censorship jail," Cheng's lawyer Lan Zhixue said. "People should not be put in jail due to their sarcastic words."

Lan Zhixue and Hua have appealed Cheng's case to the Henan Provincial Department of Justice and People's Court, asking for medical parole for Cheng, who suffers from high blood pressure. The appeal also asks that she be removed from the labor camp.