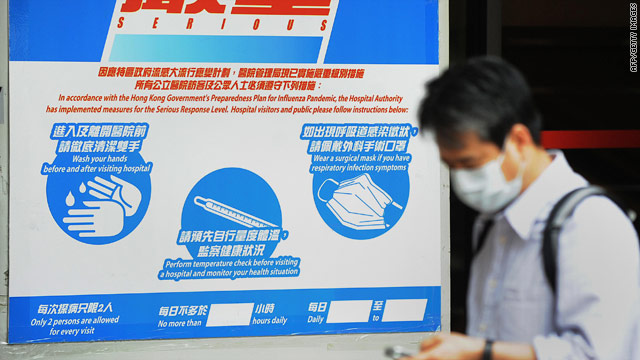 Precautionary signs permanently posted at a hospital in Hong Kong, a city at the forefront of 2003 SARS epidemic.
STORY HIGHLIGHTS

A 59-year-old woman was hospitalized in serious condition after a trip to mainland China, the Hong Kong Department of Health said.

Her illness was diagnosed as influenza A (H5), a variant of bird flu. It was unclear where she had contracted the disease. She did not have any contact with live poultry and did not visit farms while in China, Hong Kong health officials said.

Her 60-year-old husband developed possible symptoms of bird flu, but has recovered.

Hong Kong health officials have stepped up surveillance by testing patients with severe pneumonia for bird flu. They also have launched a hotline to answer questions from the public, and are working with health officials in mainland China to monitor any occurrences.

Avian influenza does not normally infect species other than birds and pigs. But humans came down with bird flu in Hong Kong in 1997, with the H5N1 strain infecting 18 humans, six of whom died.

Then, people became infected after coming into close contact with live infected poultry. Genetic studies showed the virus had jumped from birds to humans, and caused severe illness with high mortality.

Hong Kong's entire poultry population, estimated at 1.5 million birds, was destroyed within three days. That is thought to have averted a pandemic.

When humans came down with H5N1 bird flu in Hong Kong in 1997, patients developed symptoms of fever, sore throat, cough and, in several of the fatal cases, severe respiratory distress secondary to viral pneumonia.

Antiviral drugs can be used to treat and prevent bird flu in humans, but it can take months to develop a vaccine in significant quantities for a new virus subtype, according to the World Health Organization.

All birds are thought to be susceptible to the avian influenza, though some species, such as wild ducks, are more resistant than others. Domesticated poultry, such as chickens or turkeys, are particularly susceptible.

Infection triggers a wide spectrum of symptoms in birds, ranging from mild illness to a highly contagious and rapidly fatal disease resulting in epidemics. In severe cases, the flu is characterized by a sudden onset of severe illness, and rapid death, with a mortality that can approach 100 percent.