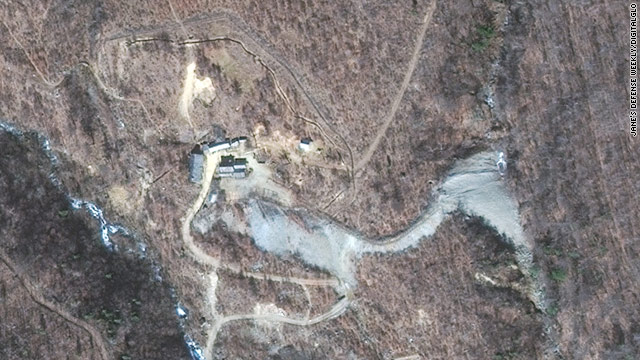 Experts at Jane's Defense Weekly say the tunneling operation seen in the satellite imagery may indicate a test is planned.
STORY HIGHLIGHTS

But as often is the case, with satellite imagery being one of the main methods of gleaning insight into the North, what's going on in the ground is not entirely clear.

Two recent sets of commercial satellite photos show what experts believe is tunneling work near the location of a 2009 underground nuclear weapons test site and construction of a light water reactor at the Yongbyon nuclear complex.

A nuclear security think tank obtained the satellite pictures of the Yongbyon construction and showed them to Siegfried Hecker, an American physicist who recently visited Yongbyon and was the first to report that North Korea was building the light water reactor. Hecker confirmed the construction is of the new nuclear reactor, according to the Institute for Science and International Security (ISIS).

A light water reactor is used for generating electricity. Paul Brannan, the senior research analyst at ISIS, said the reactor would need to be fueled by low-enriched uranium, which gives rise to the question of where North Korea would get the material.

"The assumption is they will introduce into the equation that they already have a gas centrifuge enrichment program. They are trying to ease into it," said Brannan.

A successful enrichment program not only would enable North Korea to produce low-enriched uranium for the reactor, but it could potentially be further developed and expanded to make the highly enriched uranium (HEU) used for nuclear weapons. 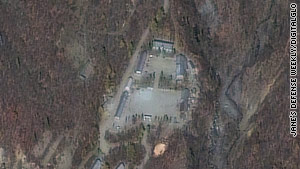 In 2002, North Korean officials categorically denied they had a secret uranium enrichment program when the U.S. confronted them with intelligence. Last year, North Korea indicated it planned to build an enrichment plant within the decade.

Another issue with the light water reactor is its design. ISIS President David Albright said the North Koreans could design the reactor to produce nuclear weapons-grade plutonium.

There's equal ambiguity about what's going on at the nuclear testing location near the town of Kilju.

An article by experts at Jane's Defense Weekly indicates the tunneling operation and other activity at the site seen in the satellite imagery is similar to the configuration seen ahead of a test last year.

"North Korea's 25 May 2009 nuclear test was conducted by tunneling into the site's terrain and sealing the testing material inside the mountain," wrote Allison Puccioni and James Hardy.

A U.S. official said the photos are far from conclusive about what North Korea is up to.

"We certainly cannot discount the possibility, but the satellite photos in themselves don't indicate any imminent nuclear test," the official said.

Brannan acknowledges the images do show tunneling activity, but said similar work has been going on since the fall of 2009 and it doesn't necessarily mean it's tied to an upcoming test.

"It's a military site and tunneling is the hallmark of most sites regardless of the purpose," said Brannan, adding, "we avoid trying to read the tea leaves at these sites."

"We're trying as we always do to decipher real intent in this otherwise very secretive country. If it is true they are pursing any one of these things it is obviously of concern to us, and we would call on the North not to take any additional provocative or destabilizing actions," Morrell said.