Family waits to see if mother, accused of blasphemy, will be hanged 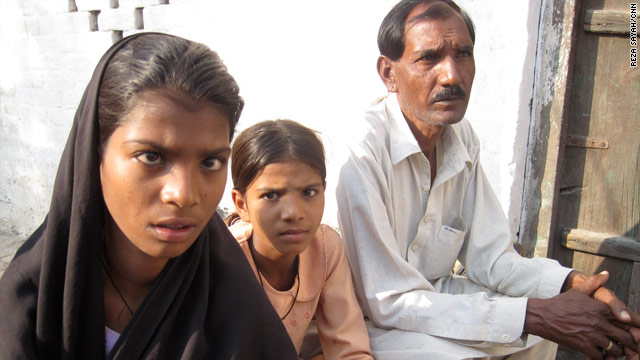 Itan Wali, Pakistan (CNN) -- In this village in Pakistan's Punjab province a tearful 12-year-old girl ponders if the Pakistani government will soon hang her mother.

"Whenever I see her picture I cry," Isham Masih told CNN. "I want my mother back. That's what I'm praying for."

This month a Pakistani court sentenced Isham's mother, 45-year-old Asia Bibi, to death, not because she killed, injured or stole, but simply because she said something.

Prosecutors say Bibi, who is a Christian, broke Pakistan's strict blasphemy law by insulting Islam and the prophet Muhammad, a crime punishable by death or life imprisonment according to Pakistan's penal code.

The alleged incident happened in June 2009 when Bibi, a field worker, was picking fruit in a village two hours west of Lahore. Prosecutors say when Bibi dipped her cup into a bucket of drinking water during a lunch break, her co-workers complained the water had been contaminated by a non-Muslim.

Court records show the women got into a heated argument.

Mafia Satar said she was there and heard Bibi's insults.

"She said your Muhammad had worms in his mouth before he died," Satar told CNN, a crude way of saying Muhammad was no prophet.

The town cleric, Qari Muhammad Salim, reported the incident to police who arrested Bibi. After nearly 15 months in prison came her conviction and the death sentence.

Masih denies his wife ever insulted Muhammad. He said death threats forced him and his daughters, one of them disabled, to flee their village.

Neither the Koran nor the prophet Muhammad's teachings in the Hadith call for the execution of blasphemers, but Islamic scholars and jurists from generations past included the death sentence when drafting Islamic law.

Activists say the government has refused to amend the law for fear of backlash from Islamist groups and their followers who deem scrapping the law as un-Islamic.

At the time this report was filed, Pakistan's law minister had not responded to CNN's request for an interview.

Bibi has appealed her death sentence and asked for bail, the chief prosecutor of Punjab province told CNN.

Pakistan has never executed someone convicted of blasphemy but in Bibi's village public opinion was unanimous.

"Yes, she should be hanged," a group of villagers cried out.

The town cleric, who made the initial complaint against Bibi, called her death sentence one of the happiest moments of his life.

The clerics tears are in stark contrast to those shed by Bibi's daughter Isham, who wants her mother to live.