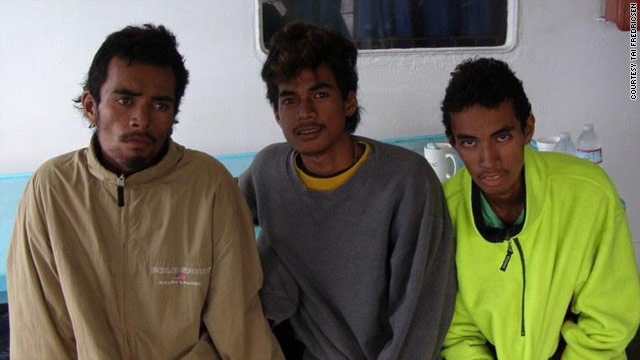 (CNN) -- A doctor in Fiji is examining three teenage boys rescued 240 miles from land after they were lost in the South Pacific for more than 50 days.

Apunas Sakamuri, spokesman for the police department in Suva, Fiji, said the three were admitted to Suva Public Hospital and then released to a private doctor identified as Dr. Rosemary Mitchell.

Filo Filo, 15, and his cousins -- Etueni Nasau, 14, and Samu Pelesa, 15 -- were famished, dehydrated, exhausted and sunburned when a crew member on a fishing boat two miles away spotted their 12-foot metal boat and alerted his superior.

The rescue, which came two weeks after hundreds turned out to mourn them, elated their friends and relatives.

Tanu Filo, whose 15-year-old son Filo was among the survivors, told CNN Thursday in a telephone interview from his native Tokelau Islands that, "I was on cloud nine. I was so joyful."

"I couldn't believe my son and his boys were found again. Unbelievable," said Tanu Filo, who noted that a traditional celebration is now in order.

"He alerted us that he saw something immediately on our bow, directly in front of us," Tai Fredricsen told CNN Thursday from his 280-foot tuna boat. "As we drew closer, we could tell that it was a small boat of some type."

The boat was a strange find so far from land. "It's not something you go in the open ocean with," he said, noting that the boat was 240 miles northeast of Fiji when it was spotted late Tuesday afternoon.

And it got stranger. Inside were three naked teenage boys -- cousins from the Tokelau Islands 750 nautical miles away. Asked whether they needed help, they said yes.

When he learned how long they had been adrift, Fredricsen released his rescue boat, took them aboard his fishing boat, the San Nikunau.

"They looked very bad -- bones protruding from underneath the skin, but mentally strong, strong as an ox," Fredricsen said.

He moved them to his cabin's king-sized bed, where "they all fit comfortably," and began administering first aid to their burned skin.

"They were ecstatic," he said.

He also gave them electrolyte-spiked liquids as he had been trained to do in a first-aid class. "I just gave them very small doses -- they more or less let the drink stay in their mouth and they swirled it around and let it absorb in their cheeks very slowly."

After about half an hour, they were able to swallow, but he urged them to go slowly. "They knew I was trying to help, and they did what I said. The cooperation was just incredible from the start."

I couldn't believe my son and his boys were found again.
--Tanu Filo
RELATED TOPICS

After a couple of hours, they were able to eat small pieces of dry white bread, he said. Four hours later, he was feeding them slices of oranges and apples.

"And then they were starting to get a little bit carried away -- they were wanting some McDonald's or some French fries, but I couldn't allow them to have that yet."

After six hours on board, the three teenage boys began to mingle with the crew. By 4:30 a.m. local time Thursday, they were transferred to a Fiji coast guard vessel, destined for a hospital in Suva on that Pacific island, "hopefully warm and cozy."

Throughout, the boys were smiling, he said.

Natives of the Tokelau Islands -- three small atolls in the Pacific Ocean, about midway between New Zealand and Hawaii -- the boys said they had set out in the boat in early October to travel from one island to another, Fredricsen said.

"The islands are pretty close and they can be transited quite easily with these small vessels," but they got disoriented after losing sight of land, "and that was it," he said.

The boys said they had left their island with enough coconuts to keep them hydrated for two days, he said. But they used a tarpaulin to catch rainwater and for shelter after their clothes disintegrated. And two weeks ago, they caught a seabird, which they ate, he said.

About the same time, authorities had concluded that the teens could not have survived and declared them dead. Two weeks ago, their families and friends held a memorial service attended by 500 people, in the island chain that has a total population of 1,400, according to the Sydney Morning Herald.

But their rescue came just in the nick of time. "They did admit to me they had started drinking salt water two days prior to us rescuing them," Fredricsen said.

Drinking excess amounts of saltwater can shut down one's kidneys, which can be fatal.

The boys were spotted in an "unusual place" -- west of the Tokelaus, between western Samoa and Fiji, said Eric Barratt, the managing director for the Sanford seafood company, whose boat found the boys.

It was dumb luck that the fishing boat came upon the boys, said Fredricsen, since its usual port of unloading and operations is in American Samoa.

"By chance, we were going to New Zealand to unload" because the boat was scheduled to be pulled from the water and inspected, a quadrennial event, he said.

Fredricsen called the Tokelau Islands and informed Pelesa's grandmother of his unusual catch.

"I just told her we found her kids, and it was total hysteria," Fredricsen said. "It was just amazing."

Tanu Filo described a similar scene, with singing and hugging among the villagers when the good news arrived. But when Filo Filo first phoned his father from the boat, "he cried more than he talked," his father Tanu recalled.

"I can tell you that he's tired and all, from the way he speaks," Tanu

Filo said. "But he was so happy." Fredricsen said the boys left their mark on him and his crewmates -- not only because of what they endured while lost at sea, but because of their attitudes after rescue.

"It was just an uplifting experience to meet these young men," Fredricsen said. "They didn't give up."

Tanu Filo said locals are "trying to plan a celebration in a Tokelean way." Besides the boys, he would like the tuna boat's captain and crew to join in the celebratory eating, singing and joy.

"I'd like to say thanks, and shake hands and celebrate ... together," Tanu Filo said. "We want to invite them to the feast."

-- CNN's Salma Abdelaziz and Tom Watkins contributed to this story.