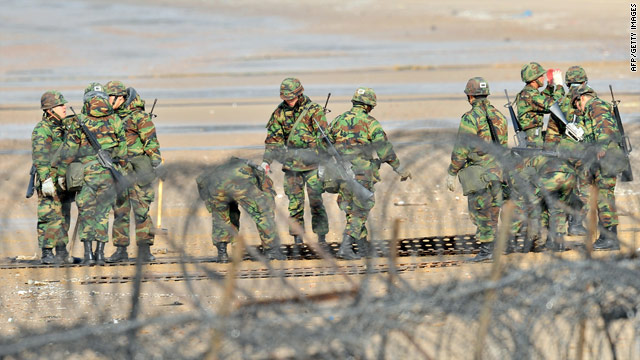 "Fellow citizens, at this point, actions are more important than words," Lee said in a televised address Monday morning. "Please have trust in the government and the military and support us."

The divided peninsula -- tense at the best of times -- has been near the boiling point since Tuesday, when four people died in a North Korean artillery barrage that targeted the South Korean island of Yeonpyeong. Lee called that attack an "inhuman crime" that followed decades of previous attacks from North Korea, including the sinking of the South Korean warship Cheonan in March.

"It is difficult at this point to expect North Korea to abandon its nuclear weapons or military adventurism," he said. "We are now clearly aware that we cannot stay patient and be generous. That will only give rise to bigger provocations."

Lee's address came a day after South Korean and U.S. forces started joint military exercises Sunday, prompting a furious response from North Korea. The aircraft carrier USS George Washington is set to join South Korea's forces near the coasts of China and North Korea for the four-day drill, which the North called "no more than an attempt to find a pretext for aggression and ignite a war at any cost," according to the official Korean Central News Agency.

China, North Korea's closest ally, called Sunday for an emergency meeting of the six major powers involved in talks about the Korean peninsula. Top diplomats from the six nations -- which also include Japan, the United States and Russia -- need to meet soon to "maintain peace and stability on the peninsula and ease the tension" in the region, Beijing's special representative for the region, Wu Dawei, said Sunday.

A top Chinese envoy met with Lee on Sunday, and a high-ranking North Korean official will visit Beijing this week, China's Xinhua news agency said. South Korea said Sunday it did not think the time was right for a resumption of the six-party talks, but said it would "bear in mind" the Chinese proposal.

In Washington, meanwhile, a State Department spokesperson told CNN that it is consulting with its allies, but resumed six-party talks "cannot substitute for action by North Korea to comply with its obligations."

"Clear steps by North Korea are needed to demonstrate a change of behavior," said the spokesperson, who was not authorized to speak for attribution.

And U.S. Sen. John McCain, R-Arizona, said on CNN's "State of the Union" Sunday that the flare-up exposed the failure of "continued appeasment" of North Korea by Republican and Democratic administrations. He said the United States has given North Korea more than $1 billion in aid over the past 15 years with the goal of getting them to the negotiating table.

"It seems the purpose of everything is to get the North Koreans to the table," said McCain, the ranking Republican on the Senate Armed Services Committee. "The North Koreans' only claim to their position on the world stage is their nuclear capability. And they have a terrible, most repressive, oppressive regime in the world. They have hundreds of thousands of people in slave labor camps. And all of that seems to be sacrificed in the altar of, quote, 'negotiations.'"

North Korea said the South provoked the attack because shells from a South Korean millitary drill landed in the North's waters. And it has consistently denied responsibility for the sinking of the Cheonan, which killed 46 South Korean sailors.

A group of 124 people left Yeonpyeong Island by boat Sunday. The South Korean defense ministry is urging journalists to leave the island voluntarily because of the instability, the Foreign Correspondents' Club of Seoul said Sunday.

The violence has sparked anger and political turmoil in South Korea. The country's defense minister, Kim Tae-young resigned after the exchange of fire, and veterans of the South Korean military protested Saturday on the streets of Seoul, stating they were angry that their country's government had not done enough to respond to the North's shelling.