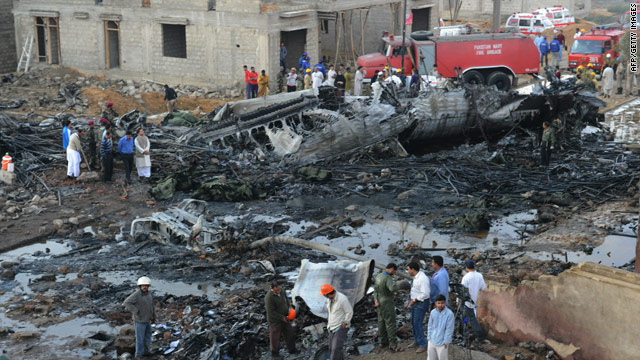 Islamabad, Pakistan (CNN) -- The death toll from a plane crash Sunday in Karachi, Pakistan, rose to 12 after an official confirmed the deaths of four people who were on the ground.

The four laborers were sleeping in an under-construction building that the plane crashed into, said Pervez George, a spokesman for Pakistan's Civil Aviation Authority.

Additionally, a man on a motorcycle was critically injured when the plane crashed, George said.

The plane crashed early Sunday in the southern port city, killing eight Russian nationals on board and sending flames shooting through the sky, a Pakistani official said.

The cargo plane took off at 1:45 a.m. (3:45 p.m. Saturday ET) from the Jinnah Karachi International Airport for Khartoum, Sudan, and went down a few minutes later in the Gulistan-e Johar section of Karachi, an area where many Pakistani naval officers live.

The plane appeared to hit several buildings that were under construction.

The pilot appeared to deliberately bring the plane down in a less densely populated residential area in order to save lives,

A witness told CNN that he saw fire on one of the plane's wings before it crashed.

The blaze was put out by 4 a.m., according to George, but rescue personnel continued to comb through the rubble looking for other people possibly killed or hurt.

Bystander Mohammed Raees told GEO News that he was injured after flaming parts of a building hit him and the motorcyle he was preparing to ride. Hospital sources told the CNN affiliate that Raees had burns over 60 percent of his body.