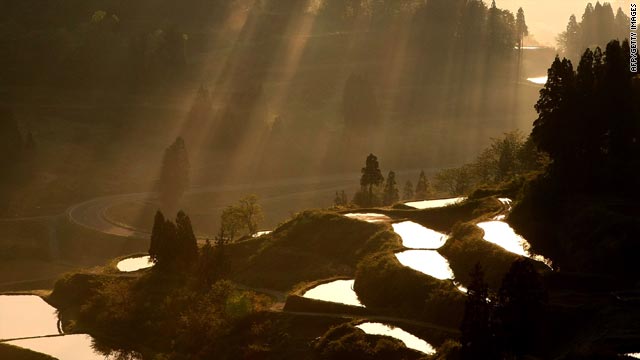 The Satoyama Initiative takes its name from the satoyama landscape which has been farmed sustainably for centuries in Japan.
STORY HIGHLIGHTS

London, England (CNN) -- It is a country that provides the world with much of its modern technology, but Japan is now adding some old-fashioned rural wisdom to its exports list in an effort to stem nature loss around the world.

The Satoyama Initiative has been set up by Japan's Ministry of the Environment and the United Nations University Institute of Advanced Studies (UNU-IAS) in an attempt to promote traditional Japanese land conservation around the world.

While its widely recognized that conservation of unspoilt wildernesses is vital to preserve eco-systems, the fight to preserve and promote biodiversity in human-influenced habitats is equally urgent.

And that's where the Satoyama Initiative hopes to help, advocating a vision of "sustainable rural societies in harmony with nature."

"These areas are at the interface of nature and human settlement...most of these landscapes are facing challenges
--Fumiko Nakao, U.N. University Institute of Advanced Studies
RELATED TOPICS

The initiative takes its name from the Japanese word for the landscapes located between villages (sato) and the mountains (yama) which have for centuries fostered rich biodiversity thanks to continued human management of the land.

According to Masahito Yoshida, chair of the International Union for Conservation of Nature (IUCN) in Japan, satoyama covers 60 percent of the land.

These landscapes vary in use, but all provide a dual service.

Paddy fields and the ponds and ditches which irrigate them not only provide a staple of the Japanese diet but also function as wetland habitats for wildlife.

Managed woodlands harvested for firewood and charcoal also provide ideal habitats for many species of wildflowers, while the vast expanses of pasture and grassland are home to small mammals, birds and insects.

Fumiko Nakao, fellow of the United Nations University Institute of Advanced Studies told CNN: "These areas are at the interface of nature and human settlement, and most of these landscapes are facing challenges."

Increasing urbanization and industrialization has seen the agricultural workforce in Japan shrink from 45.5 percent in 1950 to just seven percent today, according to UNU-IAS.

And that workforce is increasingly old, as the young flee to the cities in search of better paid jobs.

Nakao says the principal aim of the Satoyama Initiative is to examine rural areas threatened with overuse or neglect and highlight new activities which can revitalize them.

Over the last three years the initiative has been compiling case studies from all over the world -- including Malaysia, Peru, Kenya, Australia, Spain and the United States -- shining a light on sustainable rural practices which adhere to the spirit of satoyama landscapes.

Back in Japan, the initiative is tracking the progress of several projects where communities and land are being brought back to life.

Nakao highlights the example of Kyotango City, a mountainous rural area in the Kyoto Prefecture, where the construction of a new biogas power plant in 2007 and a forest dairy farming scheme is helping revitalize the local economy.

Furthermore, a liquid fertilizer -- a byproduct of biogas production -- is replacing chemical sprays, opening up new and potentially profitable markets in organic produce.

And as the land returns to use, so wildlife habitats are beginning to prosper again.

The Satoyama Initiative received a boost at the recent U.N. Convention on Biological Diversity (CBD) talks in Nagoya, Japan where it was officially recognized as "a potentially useful tool to better understand and support human-influenced natural environments for the benefit of biodiversity and human well-being."

Josephine Langley, an IUCN scientist who attended the U.N.'s biodiversity summit believes the satoyama landscape represents some of the "fundamental principles" of the CBD.

"The Satoyama Initiative and the satoyama landscapes...is a way to recognize traditional knowledge of people who are actually doing the management of biodiversity on a day to day basis," Langley said.