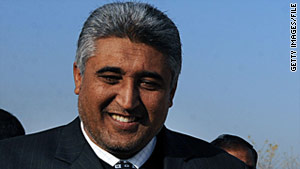 One cable says Agriculture Minister Asif Rahimi is the only minister "about whom no allegations of bribery exist."

(CNN) -- Hundreds of U.S. diplomatic cables obtained by WikiLeaks paint a picture of corruption in Afghanistan at every level of government and society.

Cables from the U.S. ambassador in Kabul portray Afghan President Hamid Karzai as paranoid, with an "inability to grasp the most rudimentary principles of state-building."

Many of the cables were sent from the U.S. Embassy in Kabul over the last two years. The New York Times, which had advance access to the estimated 250,000 documents leaked to WikiLeaks, reported the documents showed corruption's "pervasive nature, its overwhelming scale, and the dispiriting challenge it poses to American officials."

One cable from the U.S. mission in Kabul earlier this year noted that the agriculture minister, Asif Rahimi, "appears to be the only minister that was confirmed about whom no allegations of bribery exist."

At the same time, Dr. Sayed Fatimie, the minister of health, told U.S. diplomats that members of Parliament wanted cash to confirm his appointment. "Fatimie said MPs had offered their own votes and the votes of others they could purportedly deliver for $1,000 apiece," a cable said.

Another Afghan minister warned U.S. diplomats that Karzai was "under great pressure from political leaders to accept a number of ministerial candidates whose technical skills are lacking." The minister "argued that these political leaders are only thinking of dividing up the spoils rather than the quality of government needed to tackle Afghanistan's problems."

The cables also demonstrate an often difficult relationship between NATO allies and Karzai. At a meeting described in a cable in October 2008, a British official said the United Kingdom "continues to feel 'deep frustration' with Karzai. But he added: "I remind people that we -- the international community -- selected him."

Karzai's current vision for Afghanistan's future relies too strongly on warlords, tribal chiefs, and other personalities of the past
--U.S. Ambassador Karl Eikenberry in cable dated July 2009

Where is Julian Assange?

A look inside the 'Wiki-Cave'
RELATED TOPICS

Some months later, U.S. Ambassador Karl Eikenberry drew up a candid psychological profile of Karzai. In a cable dated July 7, 2009, Eikenberry wrote that one portrait of Karzai that emerged was "of a paranoid and weak individual unfamiliar with the basics of nation-building and overly self-conscious that his time in the spotlight of glowing reviews from the international community has passed." At the same time, he was "an ever-shrewd politician who sees himself as a nationalist hero who can save the country from being divided by the decentralization-focused agenda of Abdullah [his leading rival for the presidency], other political rivals, neighboring countries, and the US."

Eikenberry concluded: "In order to recalibrate our relationship with Karzai, we must deal with and challenge both of these personalities."

The following week, Eikenberry reported that "the President's manner was significantly more relaxed and warm than in meetings the previous week when he was often agitated, accusing the US of working against him." But again, the ambassador warned: "His inability to grasp the most rudimentary principles of state-building and his deep-seated insecurity as a leader combine to make any admission of fault unlikely, in turn confounding our best efforts to find in Karzai a responsible partner."

The ambassador concluded: "I will begin a frank, collaborative (and perhaps, at times, confrontational) dialogue with Karzai. No alternative approach is now evident. Karzai's current vision for Afghanistan's future relies too strongly on warlords, tribal chiefs, and other personalities of the past who would be difficult to reconcile with our commitments to build strong government institutions and professional security forces."

The cables from Kabul also underline the difficulty in confronting money-laundering of profits from the heroin trade and other criminal enterprises. One from October 2009 claimed that one hawala (informal cash) network "is facilitating bribes and other wide-scale illicit cash transfers for corrupt Afghan officials and is providing illicit financial services for narco-traffickers, insurgents, and criminals through an array of front companies in Afghanistan and the UAE."

But an investigation of the hawala network proved difficult. One cable reported that Afghanistan's interior minister asked that the U.S. take a low profile on the case to avoid the perception that investigations were being carried out "at the behest of the United States."

In another cable, a senior Afghan official told the U.S. Embassy that of the $200 million collected in fees on truck traffic, just $30 million reached government coffers.

And in October 2009, a cable from the U.S. Director of Development said "vast amounts of cash come and go from the country on a weekly, monthly and annual basis. Before the August 20 election $600 million in banking system withdrawals were reported." More than $190 million in cash had been taken through Kabul Airport to Dubai alone.

The New York Times cites another cable in which an Afghan official explained the "four stages" at which his colleagues skimmed money from development projects: "When contractors bid on a project, at application for building permits, during construction, and at the ribbon-cutting ceremony."

But one cable from earlier this year graphically demonstrated the dilemma facing U.S. and allied officials as they try to grapple with corruption. It talks about one Afghan Border Police Commander "accused constantly of illegal trafficking and taxing activities." But at the same time the officer had been careful to "maintain a co-operative relationship with the ISAF (NATO-led International Security Assistance Force) leadership" in a district crucial for the safe passage of NATO convoys.

The cable concluded that both ISAF and the U.S. government "walk a thin tightrope when working with this allegedly corrupt official who is also a major security stabilizing force."

It's a dilemma that's echoed on an almost daily basis across Afghanistan, if these cables are any guide.