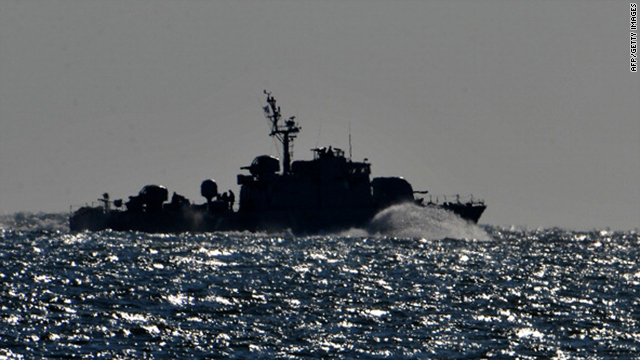 (CNN) -- The South Korean navy began live-fire exercises on the seas surrounding the Korean peninsula Monday in the midst of bristling tensions with the North, South Korean state media reported.

The military exercises are taking place in the waters off all three coasts of the Korean peninsula, officials at the South's Joint Chiefs of Staff told the Yonhap news agency.

They are scheduled to last through Friday and come on the heels of joint military drills between the United States and South Korea that ended last week and nearly two weeks after the North's November 23 shelling of South Korea's Yeonpyeong Island. The attack killed four South Koreans -- two civilians and two military personnel -- and the South returned fire.

The live-fire drills are a routine monthly exercise aimed at securing the safety of ships in the area, the South's Joint Chiefs of Staff told CNN last week. But they come amid rising tensions on the divided peninsula.

North Korea's official news agency, KCNA, lambasted the planned exercises in an article Sunday -- claiming South Korea's government was trying to orchestrate another clash around the border island "at any cost and ignite a war come what may under this pretext."

South Korea's new defense minister said Friday his country would respond with airstrikes if North Korea attacks it again, in some of the strongest rhetoric since the conflict broke out late last month.

"We will definitely air raid North Korea," Kim Kwan-jin said at his confirmation hearing when asked how the South would respond if struck again, according to Yonhap.

Kim was appointed defense minister last week amid growing tensions on the Korean peninsula following an exchange of gunfire between the two sides. He took office on Saturday.

His comments reflect a potential shift in South Korea's policy toward provocations from the North. Previously, South Korean President Lee Myung-bak warned of severe consequences if the North launched another attack, but declined to name specifics.

"If the North commits any additional provocations against the South, we will make sure that it pays a dear price without fail," he said in a nationally televised address a week ago.