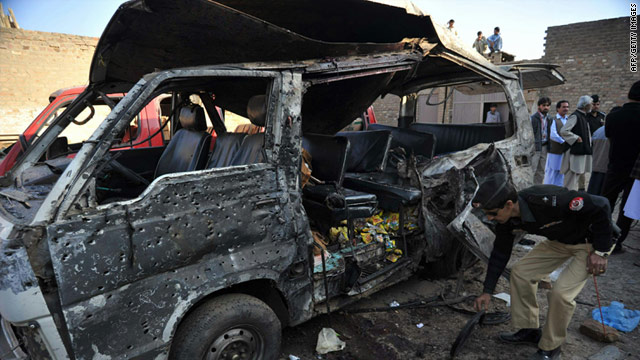 A police officer inspects a van after a suicide bomb attack in Kohat, Pakistan on December 8, 2010.
STORY HIGHLIGHTS
RELATED TOPICS

Islamabad, Pakistan (CNN) -- A teen-aged suicide bomber killed at least 18 people and wounded 33 others on board a bus Wednesday in northwest Pakistan, officials said.

The teenager detonated explosives on the bus as it was about to drive off at the Tirah Bazar market in Kohat, according to city police chief Dilawar Bangish. Kohat is in the Khyber Pakhtunkhwa province, formerly known as the North West Frontier Province.

Elsewhere, in the province's Hangu district, suspected militants kidnapped eight male school teachers who were on their way to class Wednesday, police said.

Police were able to rescue five of the teachers later, but three others remained missing after an exchange of fire with police, said Islam Khan, a police official in the district.

The suicide attack drew swift condemnation from the U.S. Embassy in Islamabad.

"By attacking a market place where innocent men, women, and children were gathered, those responsible for this blast -- and the two other major bombings this week -- demonstrated inhuman disregard for human life."