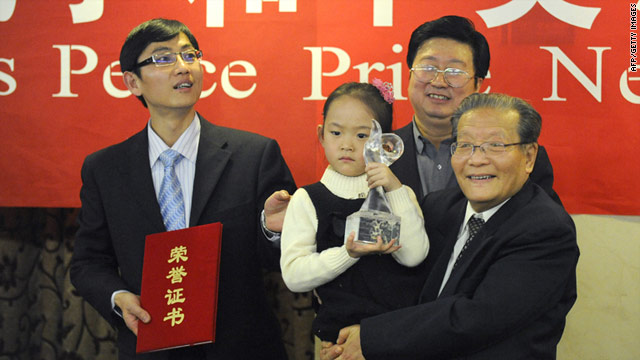 The six-year-old local girl received a trophy and a certificate in front of a sea of television cameras from the organizers of the Confucius Peace Prize, which also comes with an award of $15,000.

The ceremony's hosts said Zeng was chosen to accept the award on behalf of Lien Chan, the real winner and Taiwan's former vice president, because "children symbolize peace and future."

Members of the prize jury said Lien, who they deemed had made major contributions to bridging the gap between Taiwan and mainland China, could not attend the event for "reasons known to everyone" -- but apparently not to the recipient himself.

"We know who Confucius is, but don't know anything about this prize," Ting Yuan-chao, director of Lien's office in Taipei, told CNN earlier.

None of these factors seemed to have deterred the organizers, who promised to make this an annual event. Brushing aside suggestions that their prize was meant to counter the Nobel award, the head of the jury insisted their focus to be promoting the ancient Chinese sage's philosophy.

"China is a great nation that has been influenced by the Confucian concept of peace for a long time," Tan Changliu, chairman of the prize committee, told CNN before the ceremony. "We want to promote world peace from an Eastern perspective."

Other members of the jury launched tirades against the United States, accusing it of destabilizing northeast Asia for staging war games in the region amid current tensions on the Korean Peninsula.

Tan declined to give details about his group -- other than stressing it is a non-government organization and the prize money came from an anonymous donor -- or how the five judges selected the nominees and the eventual winner.

Of the eight nominees, only a Chinese poet, Qiao Damo, showed up and said it was a great honor to be chosen along with the other men.

"We urge relevant U.S. lawmakers to realize their mistake, change their arrogant and unreasonable attitude and show respect for the Chinese people and national sovereignty," said Jiang Yu, a foreign ministry spokeswoman.

Back at the Confucius award ceremony, organizers refused to say if they will watch Friday's Nobel event.

Despite the perceived rivalry between the two peace prizes, they seem to have one important thing in common -- the absence of their recipients at this year's award ceremonies.