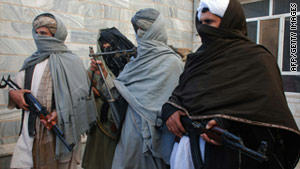 The fighting erupted on Saturday as NATO-led forces pressed on against militants in the Afghanistan, a battle-scarred country that U.S. Defense Secretary Robert Gates called "tough terrain" this week.

It also comes a day after 15 civilians were killed and four others were wounded when a roadside bomb ripped through a village in Helmand province.

He said forces were working to arrest a suspected insurgent who was near the people.

"The suspected insurgent was arrested, and investigation is under way to getting more details," Mangal said.

NATO's International Security Assistance Force said it is investigating allegations that the dead civilians were seven members of a private security company.

ISAF said the force was hunting down a militant linked to a recent suicide attack at a base near Gardez City.

After the militant -- a member of the Taliban-linked Haqqani network -- was detained, the forces "moved to a follow-on target nearby to investigate suspected insurgent activity," ISAF said.

Using a bullhorn and speaking in Pashtun, occupants of a targeted vehicle and compound were told to leave peacefully.

"During the call-out, a male exited an SUV with an AK-47 and moved toward the security force. The security force assessed the individual to be hostile and shot him. Multiple other armed individuals then engaged the force, which resulted in a total of seven individuals killed," ISAF said.

A suicide attacker targeted an Afghan army post in the Dobandi area of Chardra district with a police vehicle captured last year during fighting. Nine civilians, including women and children, and four soldiers were wounded, a provincial official told CNN.