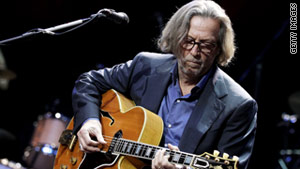 (CNN) -- One of the diplomatic cables published by WikiLeaks reveals that North Korean officials suggested the U.S. government make arrangements for rock icon Eric Clapton to perform in Pyongyang as a way of building "good will" between the countries.

The suggestion was relayed to the U.S. Embassy in Seoul, South Korea, through an intermediary whose name was redacted from the document.

Representatives for Clapton did not immediately respond to requests for comment on Sunday.

But one analyst cautioned Sunday that the 2007 cable's contents could say more about an intermediary's interest in trying to promote himself by arranging a high-profile performance than North Korea's leadership.

"At that point, given the generally positive diplomatic atmosphere, I doubt the U.S. government would have objected. But this may be more the fantasy of a self-promoting intermediary than a reflection of the desire of the Dear Leader and his sons to rock 'n' roll in Pyongyang," said Mike Chinoy, author of "Meltdown: The Inside Story of the North Korean Nuclear Crisis."

However, Chinoy -- formerly CNN's Senior Asia Correspondent -- noted that the cable is not the first time a story has surfaced about the Kim family's admiration for the British rock legend.

"One of the stories about Kim Jong Chol and his brother Kim Jong Un is that one, or both, supposedly went to a Clapton concert somewhere in Europe while they were attending boarding school in Switzerland," he said.

The cable, titled "[Redacted] Shares Ideas on DPRK Interaction," deals with North Korean relations with South Korea, the United States, and Korean-Americans wishing to meet with their relatives still in the country. It makes no reference to the North Korean nuclear program.

The intermediary advocated for greater U.S. government involvement in "facilitating the reunification of Korean-American families divided by the Korean War."

The cable mentions two groups -- Compatriots United and the Los Angeles-based Pyongtong -- that arrange such reunions but often have difficulties dealing with the North Korean bureaucracy.

The document says Compatriots United has arranged "thousands of reunions," but it is under the control of North Korea's Overseas Compatriots Committee. That committee, the cable claims, "extorts a tremendous amount of money from desperate families to arrange the visits."

According to the cable, the intermediary told U.S. diplomats that "North Korea would not run such an exploitative system if the United States government were involved in the process. There is a reluctance, he said, for Korean-Americans to pursue family reunions because they do not want to divulge their personal information to the DPRK and they do not want the North Koreans to milk them for money before, during and after the reunion."

"The [United States government] could at least volunteer to serve as a conduit for correspondence between these families and North Korea to prevent the DPRK from learning the home addresses and bank accounts of participants. The DPRK might be willing to accept this structure because it badly wants a relationship with Washington," the cable reads.

The intermediary also described the frustrating process for any outsiders to get things done in North Korea.

"It is necessary to get the DPRK's various institutions to cooperate. Each institution seems to have veto power, but none has the power to push anything forward. ... The only organizations that can really deliver are the military, which does not talk to anybody, or the Red Cross."