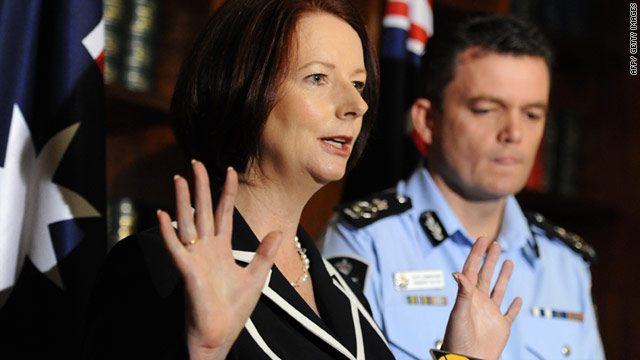 The vessel crashed on Wednesday along the shore near Christmas Island, and Gillard, speaking at a Thursday news conference, called the event a tragedy.

"Yesterday we saw a truly horrific event, a terrible human tragedy, on what is a very dangerous coastline at Christmas Island and I know the nation is shocked by what we have seen," Gillard said.

Rescuers were able to pull 42 people from the treacherous waters and many were still getting medical treatment, Gillard said.

It was unclear how many people were on the boat so there could be more bodies found, Gillard said.

The government does have a tough set of border protection policies. We've got more assets patrolling Australia's borders than we've ever had before.
--Australian Prime Minister Julia Gillard.

The incident has also shined a light on Australia's policy on asylum seekers.

Reporters peppered the prime minister with questions about Australia's policy with some suggesting that Gillard supports soft border protection policy that encourages asylum seekers to flee to Australia.

Another reporter asked: Isn't it "morally incumbent on your government now to do whatever it takes, within reason, to stop these boats from coming, including a much tougher set of border protection policies?"

Gillard defended Australia's policies and said more answers would come from the investigations into the incident.

"The government does have a tough set of border protection policies. We've got more assets patrolling Australia's borders than we've ever had before," Gillard said.

Gillard said the people on the boat were from Iran and Iraq. She also said people were from the Kurdish region and that includes Iran, Iraq, Turkey and Syria.

She said the investigation would involve the police and the coroner. The police will determine if there needs to be criminal charges against what Gillard called "people smugglers."

Christmas Island is an Australian territory in the Indian Ocean, closer to Indonesia than to Australia. The island is about 1,600 miles northwest of the western Australian city of Perth and 220 miles south of the Indonesian capital, Jakarta.

On Thursday, Australian authorities said they stopped a boat that had more than 50 suspected asylum seekers in waters near Ashmore Island. Authorities will be transferred to Christmas Island for security and identity checks.