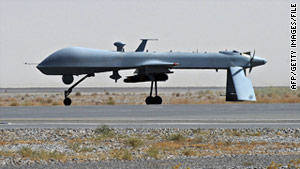 The United States is the only country known to have the ability to launch missiles in the region from remote-controlled aircraft.
STORY HIGHLIGHTS

It followed confirmation that four suspected militants -- two of whom were British citizens -- were killed in a drone strike in the same region last week.

Two intelligence officials said the suspected drone Thursday fired two missiles on the militants' vehicle in the area of Tirah valley in Khyber Agency, one of the seven districts of Pakistan's volatile tribal region bordering Afghanistan.

Based on a count by the CNN Islamabad bureau, Thursday's suspected drone strike was the 103rd this year. That compares to 52 in all of 2009.

Pakistani intelligence officials said Thursday that the two British citizens were among four suspected militants who died last week in the Data Khel area of North Waziristan, another of the seven districts of the tribal region.

They were targeted December 10 while sitting in a car, the officials said.

The British Foreign Office said it was aware of reports that two British nationals died and was seeking further information.

One of the British men was identified as Gerry Smith, whose Islamic name is Mansoor Ahmed, according to the officials. The second was only identified as Stephan, but also goes by Abu Bakar.

U.S. officials normally do not comment on suspected drone strikes, but the United States is the only country known to have the ability to launch missiles in the region from remote-controlled aircraft.