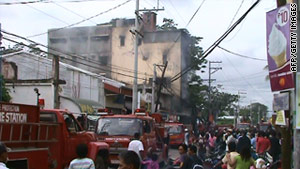 The blaze tore through the hotel in Tuguegarao City, about 350 kilometers north of the capital, Manila.

Authorities said nine of the fatalities were nursing school graduates from the University of La Salette, a few kilometers away in Santiago City. The graduates were there to take nursing licensing exams.

"It is very unfortunate that this happened just when they were about to take their exams," said Jude Bayona, the city's councilor.

The other victims were mostly relatives of the hotel's owners, including several minors, Bayona said.

All the victims were found in the top two floors of the five-story structure, according to the councilor.

The cause of the blaze is under investigation.

Journalist Eduardo D. Lingao in Manila contributed to this report.