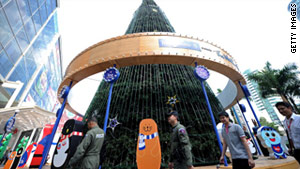 Members of a bomb squad unit patrol past a giant Christmas tree displayed in Bangkok on Tuesday.
STORY HIGHLIGHTS

Bangkok, Thailand (CNN) -- The Thai Cabinet agreed on Tuesday to lift a state of emergency that had been in place since April in Bangkok and three surrounding provinces. The order will go into effect Wednesday.

The emergency law empowered the military to take charge of security.

The government imposed it in April shortly after anti-government demonstrators broke into the country's parliament.

Thai Prime Minister Abhisit Vejjajiva said the rule was meant to "restore peace and order and to stop the spreading of false information to the Thai public."

The country gradually lifted the decree in provinces where they thought security threats had diminished.

Ninety-one people died and 1,500 others were injured in the unrest, which included intense street battles between protesters and government troops.

The Red Shirt opposition members support former Prime Minister Thaksin Shinawatra, who was ousted in a bloodless military coup in 2006. They protested for weeks, demanding that Abhisit dissolve parliament and call new elections.