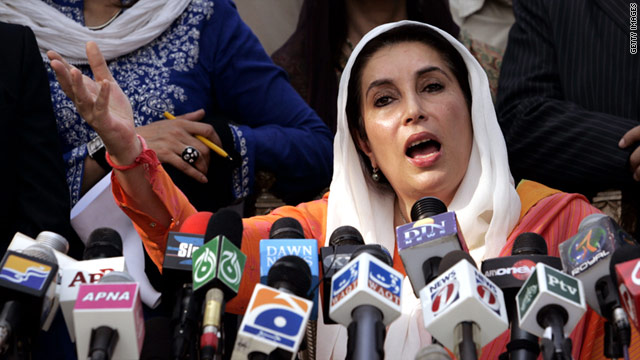 Former Prime Minister Benazir Bhutto was assassinated in December 2007 after returning to Pakistan from a self-imposed exile.
STORY HIGHLIGHTS

A court refused bail for the two officials, Saud Aziz and Khurram Shehzad, said special public prosecutor Chaudhary Zulfiqar Ali. Aziz was the police chief in the Rawalpindi district at the time of Bhutto's assassination while Shehzad was the head of her security team.

The two have been accused of security breaches, covering up evidence by hosing down the crime scene and failing to conduct a post-mortem examination on Bhutto.

Aziz and Shehzad said Bhutto's husband and the current president, Asif Ali Zardari, ordered them to not conduct the post-mortem. An audio of that request was played in court Wednesday.

The court found the two men had failed their legal obligation as police.

The panel's scathing report in April said the suicide bombing that killed Bhutto "could have been prevented" and that police deliberately failed to pursue an effective investigation into the killings.

The government of Gen. Pervez Musharraf said Bhutto had been afforded adequate protection.

Bhutto had returned from a self-imposed, eight-year exile to run in the country's general elections in 2007. She escaped one attempt on her life but was killed on December 27 by a 15-year-old suicide bomber while campaigning in Rawalpindi, the seat of Pakistan's military.

"No one believes that this boy acted alone," the U.N. report said. "A range of government officials failed profoundly in their efforts first to protect Ms. Bhutto, and second to investigate with vigor all those responsible for her murder, not only in the execution of the attack, but also in its conception, planning and financing."

The two police officials are scheduled to appear for a hearing January 7.