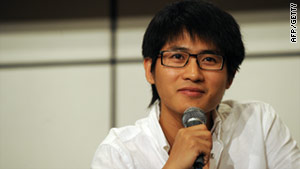 Beijing (CNN) -- The "Party" is over for one of China's most popular bloggers.

Han Han, whose blog has clocked more than 441 million hits in the past five years, announced in his latest post Tuesday that he has shut down his literary magazine "Party" after publishing just one issue.

The 28-year-old best-selling author of novels and professional race car driver is one of the most recognized faces among Chinese youth. His provocative online commentaries on current affairs have also earned him the accolade as one of Time magazine's 100 most influential people of 2009.

Han said the first issue of "Party," launched in July and sold 1.5 million copies. The second issue was due out at end of August.

"Too many people in relevant departments of the Chinese government are capable of turning literary magazines to cultural relics," he wrote in his usual sarcastic style. "If we ever meet, please tell me what went wrong."

At least three things could have gone wrong, according to industry analysts.

"In China, the publication, printing and distribution of reading materials require three different sets of licenses and permits," explained Jeremy Goldkorn, founder of the popular China media website Danwei.org. "So there are three places they can stop you."

Han revealed in the blog the difficulties he repeatedly encountered during his brief magazine-publishing career. He ostensibly denied the magazine's premature death was caused by the state's propaganda czars, who have in the past censored his writings online.

The debut issue of "Party," which analysts say had to undergo major cuts to secure government approval, featured novels, essays, poems, photos and cartoons from writers and artists across the Chinese-speaking world, including a serial penned by Han.

"It got an anti-establishment attitude, a kind of rebellious feel to it, but there was nothing explicitly anti-government," Goldkorn said.

The long delay in the second issue may have prepared Han's fans for the worst-case scenario. Among the thousands of comments left below his latest post, there is sadness, sympathy but little surprise.

"Our great motherland can tolerate so much evil but not a magazine," one reader wrote.

"I will hold on to my collector's item (the first issue) and wait for the sun to rise again," said another reader.

Despite his scathing social commentaries, Han is savvy enough to know the limits of what he can and cannot write about.

He famously posted a pair of empty quotation marks in his blog on the day the Norwegian Nobel committee announced its decision to award this year's peace prize to an imprisoned Chinese dissident.

As the government blacked out all news coverage on the Nobel announcement, Han's blog went on to attract more than 1.3 million views and some 28,000 comments.

His increasing celebrity at home and abroad, however, seemed to have come short in changing his magazine's fate in the country's tightening media environment.

"The structure in place to control the print media is much stricter than that to control the Internet," said Goldkorn, the media analyst. "There will be no loosening up until after the next leadership change in 2012."

"The Nobel peace prize made everyone in media even less willing to take risks," he added.

That dampens the prospect of Han resurrecting his "Party" anytime soon, despite the hope of many of his admirers.

"I'm not asking or requesting much -- I just hope that all the people in arts, all the literati, painters, and directors can work in an unregulated and uncensored environment," Han told CNN in an interview last May.

For now, apparently, he is asking too much.