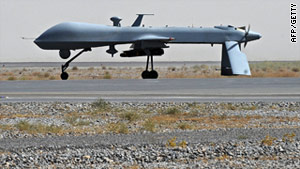 Based on a CNN count, Tuesday's strikes raises the number of such attacks to 110 this year, compared with 52 in all of 2009.

The Pakistani intelligence officials asked not to be named because they were not authorized to speak to the media.

On December 17, three separate drone strikes killed at least 57 people, a record for one day. All the deaths were in the Tirah Valley area of the Khyber Agency, north of North Waziristan.