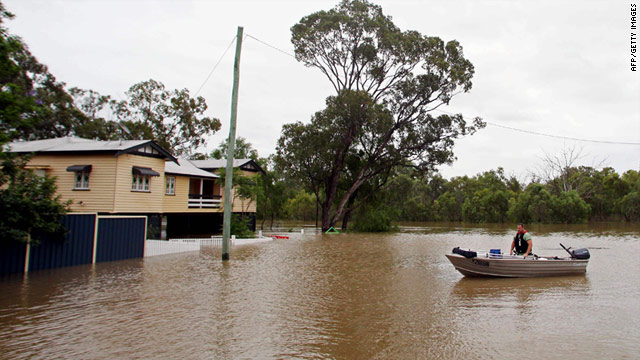 A resident evacuates his flooded home by boat in the country town of Chinchilla in Queensland.
STORY HIGHLIGHTS

(CNN) -- Thirteen townships in Australia's flooded Queensland state were evacuated Thursday as forecasters warned it may be weeks before river levels start to drop.

All 130 residents of Condamine, about 185 miles inland from Brisbane, were evacuated because the town was inundated with water, Queensland Emergency Services Minister Neil Roberts told CNN.

He said it was one of 13 townships where residents had to be moved out Thursday. In all, between 1,000 and 2,000 people have been evacuated, he said.

Roberts was in Emerald, an inland city of 15,000 residents that was experiencing some of the worst flooding Thursday. The Fitzroy River there was rising and expected to peak Friday at a record level of 16.2 meters (53.2 feet), according to Jeff Perkins, a supervising hydrologist at Australia's Bureau of Meteorology.

It's going to be a big flood over next week, up to about 9.4 meters.
--Jeff Perkins from Australia's Bureau of Meteorology.
RELATED TOPICS

Rockhampton, a coastal city of 50,000 that is also affected by the Fitzroy River, was expected to see its worst flooding in 50 years next week, Perkins said.

Many areas around the Fitzroy River will still be at flood stage in 10-14 days' time, he said.

Elsewhere in Queensland, Australia's northeast state, it was a mixed picture.

The town of Bundaberg peaked Thursday at 7.92 meters (26 feet), Perkins said. That level was expected to stay steady throughout the day but start to fall Friday, he said.

Parts of northern Queensland, however, were starting to recover from the monsoon rains that started about a week ago, creating the flooding problems, Perkins said. The rainfall has since moved south, flooding southern parts of the state, including Emerald and Rockhampton.

Over the entire month of December, Queensland has seen 1.3 meters (4.3 feet) of rain -- most of which fell during the past four or five days, said Tony Auden, a forecaster with the Bureau of Meteorology.

"There's been numerous rainfall records both for individual days and for much of the year, and for the month as well for northern and eastern Queensland," Auden told CNN.

The rain is now easing, but it has left behind flooded rivers that continue to cause the problems, he said.

Eight areas of the state have been declared disaster situations, Queensland Premier Anna Bligh said. She said the flooding was the worst she's ever seen.

"What is unprecedented about what's happening up here at the moment is just the scale and the number of communities affected," she said in an interview Thursday with the Australian Broadcasting Corporation. "I've certainly seen flooded towns before in Queensland. We have big storms and we have big river systems. But I've never seen Queensland -- and I think it's without precedent in our recorded history -- with so many places in so many diverse parts of the state each affected so critically all at once."

The government of Queensland said additional police have been sent to many flood-affected areas including Emerald, Rockhampton and Bundaberg.

It asked drivers to be careful when driving over the New Year holiday throughout the state.

More than 100,000 liters (26,400 gallons) of water was being trucked into the town of flooded town of Dalby on Thursday because it was left with only two days' worth of drinking water supply, Roberts' office said.

"This is a proactive measure, initiated before the stocks were exhausted," Roberts said in a statement. "The emergency was caused by the town's water treatment plant being out of action after flood inundation."