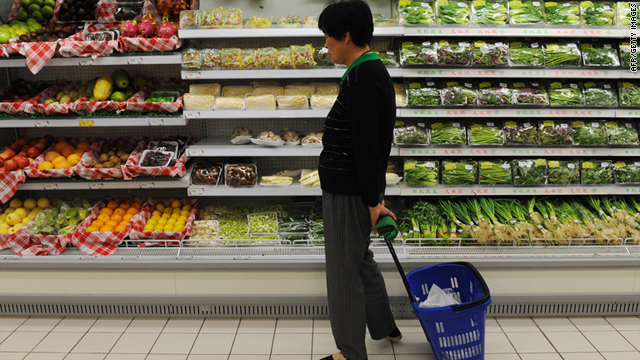 Beijing, China (CNN) -- Can money buy happiness? Apparently, not for millions of Chinese, including those who have prospered economically during the past three decades.

To be sure, China has much to brag about. It is now the world's second largest economy after the United States. Its per capita income has grown from less than $200 in 1980 to $3,700 in 2010. Some 300 million farmers have been lifted out of absolute poverty. The life expectancy of its citizens is now almost 10 years longer.

The Chinese economy grew 10.6 percent during the first three quarters of this year -- an enviable statistic, as most other major economies still struggle to recover from the global recession.

As 2010 draws to an end, however, many ordinary Chinese people say they are not feeling celebratory. They are upset about rising inflation and a widening gap between the rich and the poor.

At the bustling Chaonei Nanxiaojie farmers market in Beijing, vendors complain the prices of eggplants, ginger and garlic have gone up at much as 30 percent in the past six months.

"My customers do feel the impact," vegetable seller Zheng Lin said. "They need to eat, so they'll pay the price -- but they groan about it."

Skyrocketing food and housing prices topped the list of concerns for both urban and rural residents in the "Blue Book of China's Society," a research paper published in mid-December by the Chinese Academy of Social Sciences think tank.

"The price surge of daily life items has caused mental pressure on those wage earners who are sensitive to prices," said Wang Shuixiong, a sociologist with Renmin University in Beijing.

The pressure is especially acute on the younger generation, including some 20 million college students nationwide.

"The government should give young people a hand because they are more sensitive to food prices," said Lu Hanlong, a professor with the Shanghai Academy of Social Sciences.

Lu suggested the government adjust the basic living allowance and food subsidies for university students every three months according to changes in the consumer price index.

The picture is not much rosier for college graduates, as more than five million of them enter the increasingly competitive job market every year. Their high expectations are often quickly dashed by the harsh reality of the demand for graduates, especially for those armed with degrees in English, international trade and computer science. They used to be popular choices, but now supply has surpassed demand.

According to Beijing-based education consultancy MyCOS, the average monthly wage of a recent graduate from a top Chinese university hovers just above $400, which affords little disposable income. At current prices, that will only buy half a square meter of an apartment in downtown Beijing.

That prospect must be heartbreaking for many young men. According to a national poll jointly conducted by a branch of the official All-China Women's Federation and a match-making website, 70 percent of women surveyed say they would only marry men who own a house.

Local artists have started to parody such pragmatic calculations by some women looking for a potential spouse.

Helen Li, a fashion designer in Shanghai, launched a collection to reflect social trends. One of her most popular designs is a T-shirt emblazoned with a phrase: "Rather cry in a BMW than laugh in a Santana."

"Santana is a car model used as Shanghai's taxicabs," Li explained. "The inspiration came from what I heard at a dinner table -- some girls next to me were talking about their views on love and relationships."

I asked my friend Raymond Zhou, an acute observer of Chinese culture, to put the issue in perspective. "Basic material wealth is a necessity," observed Zhou, executive editor of the English-language newspaper, China Daily. "However, beyond that, the infinite search for more gains brings more anxiety than satisfaction."

"Many of us are better off in material wealth but our level of happiness is much lower."